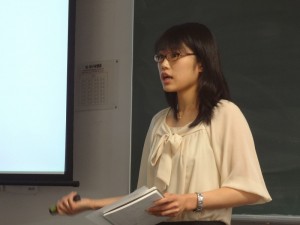 On 30th of October 2012, during the 4th period, the presentation on the chapter 13 of the “Understanding Peacekeeping” was given by Economic Development Group.
First, Eri Iijima explained the concept of regionalization. Secondly, Sune Jun Misu referred advantages and disadvantages about regionalization. Advantages of regionalization primarily are geographical proximity, long-term activities, and likelihood of its intervention even when the UN had decided not to intervene. Disadvantages of regionalization, on the other hand, are that they are likely to seek profit, lack of funding and that there are certain cases where such regional organization is nonexistent. After that, Mai Nakasendo explained regional peace keeping in practice by presenting example from the Islands of Solomon and Liberia.
During the 5th period, Justice Group presented the philosophy advocated by Michel Sandel. Chapter 5 focuses on Immanuel Kant. Moe Kurisu introduced the perspective of Kant which justice is defined by the nature of motivation for an action.Misa Komine explained what the best principle is. Then, seminar members watched lecture by Sandel on DVD.
At last, seminar members parted into 3 groups, utilitarian, libertarian, and faction Kanto, and exchanged their opinions on Japan’s pension system. (Mai Kato)