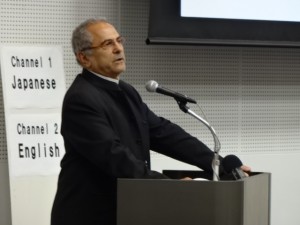 In his U Thant Distinguished lecture delivered at the UN University in Tokyo on 28 November, Former President Ramos-Horta of Timor-Leste called upon Japan, China and Korea to rise above their differences on what happened in the past and territorial issues.
Noting that the maritime territorial issues tended to divide countries, he proposed an establishment of a joint development area and sharing of the benefit of exploitation of maritime natural resources. He also proposed that the countries of Asia form a cooperative association or union as European countries have established the European Union and African countries, the African Union. Professor Sukehiro Hasegawa of Hosei University commented on two of the points made by Former President Ramos-Horta relating to the need for strengthening the national and local capacity for governance and the relationship among truth, justice, reconciliation and peace. Several participants then made comments and raised questions. The meeting lasted half an hour longer than planned.
On 30 November, President Ramos-Horta also made a courtesy call on Vice Rector Kazuhiko Takeuchi of the UN University and received an explanation from the Vice Rector about the roles and activities of the University.
(Shogo Yoshida)

*Please see also the article about this symposium in the website of Dr. Ramos-Horta.