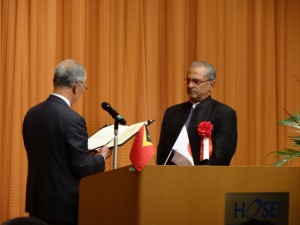 On 29th November 2012, Hosei University President Toshio Masuda granted an honorary doctorate in law to the former President José Ramos-Horta of the Democratic Republic of Timor-Leste. Mr. Masuda recognized José Ramos-Horta’s contributions to achieving independence and political stability after independence. The certificate of the honorary doctorate degree was read by Vice President Akira Tokuyasu of Hosei University. Mr. Satsuki Eda, the former Minister of Justice, Mr. Kishiro Tanabe, Lieutenant General and Vice President of the National Defense Academy, and Mr. Toshio Yamamoto, Director of the Second Southeast Asia Division of the Ministry of Foreign Affairs, made congratulatory remarks to President José Ramos-Horta for having received the honorary doctorate in law from Hosei University. During the discussion session that followed President Ramos-Horta’s memorial speech, Mr. Shogo Yoshida asked for the President’s view on the nationalistic policy advanced by some political parties. The President advised about the tendency to take a strong position by politicians during the electoral campaigning but a more cautious approach they take once they form a government. In his concluding remarks, Professor Yuji Suzuki noted the significance of contributions made by former President José Ramos-Horta in conflict resolution and management. After the ceremony was completed, actress Ms. Norika Fujiwara presented a bouquet of flowers and opened explained photographs that had taken in Timor-Leste that we exhibited in the hall way. (Yasuki Uchiyama)