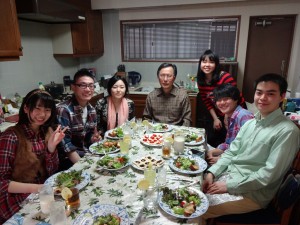 On March 9th, we visited Professor Hasegawa at his residence in Hiroo, Tokyo. These students were Torai Takenawa, Takaya Furukawa and Masanobu Hayama who had studied abroad at South Kent School, Masako Ota who had spent one year at Kent School, and Misano Matsue who had gone to Marvelwood School located in Connecticut, USA. They informed Professor Hasegawa what they did in their study and sports at their schools. They felt strongly that Japanese high school students should have more opportunities to study abroad as they would benefit significantly from their experience. We enjoyed talking to not only Professor Hasegawa but also Ms. Ikeda and Mr. Tsuchiya who also participated in the reunion.
(Masako Ota)

By the way, the students gave Professor Hasegawa brilliant presents, expressing their appreciation to him. They also had conversation about the studing abroad project with Mr. Tsuchiya and Ms. Ikeda. The students talked about what precise experiences they had during studying in the US for one year and about all of their good old memories. They also claimed that they had started to feel rejections to Japanese ways of studying English.
After they finished their conversations, they had wonderful supper cooked by Ms. Ikeda and doughnuts brought by Takaya Furukawa. They had enjoyed the delicious meals, and then they watched a DVD about the history of Hosei University and an international program it has.
At the end of this meeting, we went up to the roof and took pictures of whole members that attended today. They had an awesome time to share, and they promised to work hard on studying at the University.
(Masanobu Hayama)