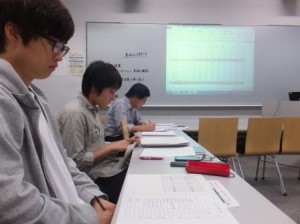 Kurosawa Seminar’s first class of fall semester was held on September 26 of 2013. During 4th period, Yasuki Uchiyama gave the orientation about the fall semester. He explained about a plan of lecture. After this orientation, we saw a video of the study tour in Cambodia which was created by Professor Kurosawa.
During 5th period, we discussed the reports of Cambodian study tour. All of the seminar students checked the reports of the meetings of organizations which we visited, such as UNICEF, CJCC, World Bank, Japanese Embassy. Finally, Professor Kurosawa provides his comments on the reports. (Yuhi Kawase)