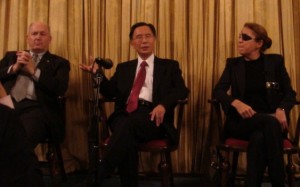 On 18 November 2008, as member of the panel discussing the outcome of international peacekeeping missions in East Timor, Professor Sukehiro Hasegawa discussed with Lt Gen Peter Cosgrove of Australia, Maj Gen Martyn Dunne of New Zealand and General Sir David Richards of theUnited Kingdom. The panel discussion was moderated by Marie Colvin, a well-known and respected journalist from The Times of London. The panel discussion was joined by some of about 80 military commanders and officers from 30 countries including two Japanese officers, Captain Tom Shirane of Japan Self Defence Force and Mr. Hajime Aoyagi of the Japanese Defence Ministry. 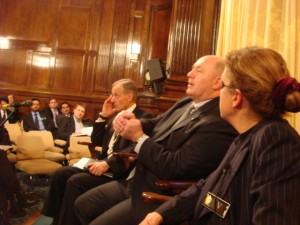 RCDS, which celebrated its 80th Anniversary in 2007, is a part of the UK Defence Academy, and located at Seaford House in Belgrave Square, London. Its mission is to prepare senior officers and officials of the United Kingdom and other countries and future leaders from the private and public sectors for high responsibilities in their respective organisations, by developing their analytical powers, knowledge of defence and international security, and strategic vision.

In fulfilment of its mission, the College runs one course a year, from January to December. Each course is attended by approximately 80 Members, around one-third from UK and two-thirds from overseas. 75% are military officers of Colonel/Brigadier or equivalent rank. The remaining 25% are civil servants, diplomats, police officers and representatives from the private sector. All have been selected to attend the course on the strength of their potential to progress to a high position within their profession. Their average age is 46.

The College curriculum focuses on defence and international security at the grand strategic level. Studies are set against a backdrop of international affairs and conducted over 4 terms:

Term 1: International Stability, Security & Prosperity in the 21st Century. Aim: To examine the principal influences upon, and potential sources of, global instability and conflict, and how conflict might best be prevented or resolved. (12 weeks)

Term 2: The United Kingdom. Aim: To examine from a strategic perspective, including through programmed visits, the impact of contemporary national and international issues on the current and future stability, security and prosperity of the United Kingdom. (4 weeks)

Term 3: Contemporary International Issues. Aim: To examine from a strategic perspective, including on an overseas tour, the impact of contemporary national and international issues on the current and future stability, security and prosperity of countries and regions in the world. (21 weeks)

Term 4: Leadership in the Strategic Environment. Aim: To enhance understanding of the nature, function and qualities of leadership required in the strategic environment to deliver effective performance across the public and private sectors, including in the international arena. (4 weeks) 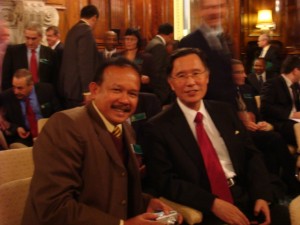 The course concludes with a one-week Decision Game in which Members role-play organisations engaged in resolving crises at the international level. Using a series of scenarios to support discussion, Members are placed under time-pressure to reach realistic strategic decisions.

Options exist for UK Members, principally from the private sector and departments other than MOD, to attend Terms 1 and/or 4 if circumstances preclude them attending the full course; defence staff of foreign embassies in London may attend Term 2. An optional Master of Arts degree course in International Studies at King’s College, London, based on the RCDS curriculum and open to all, is run in parallel with the full course.

The College programme includes visits to Washington and New York, various regions of the UK, and to Brussels (HQ NATO and the European Commission). Term 3 concludes in October with course members each spending 3-4 weeks visiting a region of the world. In 2008 the College will visit Africa, East Asia, Eurasia, Middle and Near East, North and Central America, South East Asia and Australasia, and South Asia. On 10 October, the College members visited the United Nations University in Tokyo and were briefed by Professors Hasegawa and Takahashi on Japan`s approach towards peacekeeping activities as well as Mr. Vesselin Poppovski, Director of Peace and Governance about the role of the UNU.
Further details may be found in our website: http://www.da.mod.uk/colleges/rcds.