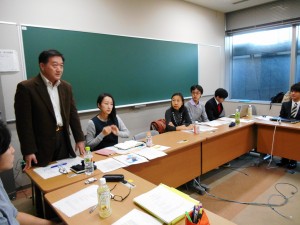 Mr Kaoru Ishikawa, former Ambassador to Egypt and currently Senior Executive Director/ Director of Research of the Japan Forum on International Relations, made a stimulating speech on the situation in Egypt as seen in various perspectives and understandings of its historical developments.

The lecture delivered under the theme of “A Nation Building in the Globalized World,” focused on the causes and implications of the current political crisis of Egypt. He attached a high value to the independent way of observing and thinking about what has been happening, noting the importance of thinking always about the ‘other side of the coin’ of what we hear or learn. He pointed that ignorance on Egyptian multi-layered societies intertwined with historical facts and traditions might have led to some missteps by foreign powers in dealing with the crisis.

Following his lecture, two commentators, Professor Takaaki Mizuno of the Kanda University of International Studies and Professor Miki Honda of the Waseda University made remarks on the aforementioned topic. Joined by other participants, extensive and lively discussions followed over such issues as national sovereignty, the Westphalia system’s non-universal reality, and election.