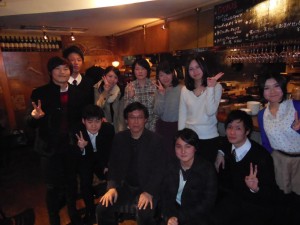 The final Kurosawa seminar class was held on 9 January 2014. In the 4th period, Professor Kurosawa gave some important presentations to seminar students. At first, he explained about international contributions by Japanese then he referred to the structure of United Nations’ staff. After that, he showed some models to start working for the United Nations and explained some important preparations needed to work for the UN. In addition, he pointed out some fundamental skills as a member of Japanese society.
In the first half of the 5th period, Professor Kurosawa mentioned former Yugoslavia conflict, using some movies, pictures and news. He elaborated that this conflict was tripartite conflict by Croats, Muslim and Serbs. There were various opinions regarding causes of the conflict, but one of them was fear of genocide by other ethnic groups and self-protection.
Finally, all seminar students commented impressions and playbacks looking back the Kurosawa seminar’s activities of this year. Then the students presented their study reports to Professor Kurosawa.
After the seminars, seminar students and Professor Kurosawa enjoyed the last diner together. (Yasuki Uchiyama)