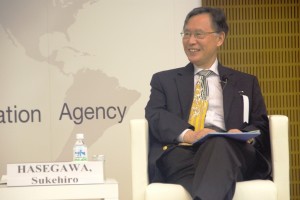 On 20 November 2014, JICA held an international symposium which looked at Japan’s ODA from historical, political-economic and comparative perspectives. Professor Hasegawa called for conceptualizing Japanese aid in a global governance perspective.

In his paper contributed to a book JICA Research Institute plans to publish in 2015 entitled “the sixty years of Japan’s foreign aid and the post-2015 agenda,” he analyzes the past, present and future of Japan’s relationship with the Untied Nations. He identifies three phases in the history of international development and peace cooperation since Japan became a member of the United Nations in 1956. According to Professor Hasegawa, Japan traversed three phases of development and peace cooperation aimed at occupying an “honored place” in the community of nations. The aim to occupy such a place constituted a symbiosis of aspirations and concerns about Japan’s place in the international community. Hasegawa stressed that Japan’s contribution to the world through the United Nations differed conceptually from the narrowly defined material interest often cited by the practitioners of foreign aid as it aimed at gaining the respect of other members of the United Nations by influencing a non-material relational outcome of interactions between Japan and other members of the United Nations.

Professor Hasegawa identifies Japan’s motives for the use of the UN system in providing humanitarian, development and security assistance and the aid related aspects of Japan’s relationship with the UN. He explains how Japan first became a benefactor of development and humanitarian assistance and made use of its aid resources for strategic purpose. Professor Hasegawa then clarifies why and how Japan later adopted a neo-realist aid approach in its relationship with the United Nations with the deployment of its self-defense forces when the charity diplomacy was found insufficient in earning the respect of other member states. He also identifies thematic areas in which Japan started pursuing a constructivist aid approach of trying to formulate global policies, norms and standards. Finally, it postulates Japan`s possible contributions to the post-2105 agenda as one of the key areas for focus in its multilateral aid through the UN system.

The initial approach, according to Professor Hasegawa, reflected the Japanese conviction that the UN system would enable the ramification process of a transfer of functional and development authority from states to international organizations. The consequence of such a process was believed to have positive multiplier effects as cooperation in one field could lead to new cooperation in another field, leading to formation of a global society administered by the United Nations system. This belief led the Japanese government to channel substantial financial resources through the United Nations system until Japan became the leading and in some cases the largest contributor to many UN aid programs. Yet, the generosity of Japan as a benevolent donor to UN agencies was seen by some as an exercise of a checkbook diplomacy that had its limits in gaining the respect of other member states.

The most notable example of the limit of checkbook diplomacy was Japan’s payment of as much as $13 billion in support of UN-authorized coalition forces to repel the Iraqi forces from Kuwait in 1990. The Japanese political leaders were shocked and dismayed by lack of any international appreciation of the Japanese financial contribution. Since then, the mental construction of the neorealist world reoriented the Japanese leaders about the role played by the armed forces.

The second phase started in 1992 with Japan sending its troop to UN peacekeeping missions. Yet, due to the constitutional constraints and strong pacifist sentiment prevailing in the country, Japan’s military and civilian personnel participation in the UN peacekeeping missions remained sporadic and, by any international standard, minuscule. At the same time, Japan’s new neo-realist approach caused unintended consequences in the perception of neighboring countries about Japan’s intention. Japan faced a conundrum and found itself in a state of dilemma caused by the absence of coherence between Japan’s intention and the measures taken to achieve its goals. The more Japan asserting itself militarily and its security alliance with the United States, the more controversy it generated domestically and internationally about Japan’s intention.

The third phase of Japan’s association with the United Nations was characterized by increased Japanese participation in advancing the concepts of human security, peacebuilding in post-conflict countries, African development, and environmental protection. Japan made vigorous efforts in pursuing, inter alia, two conceptual agenda, “human security” and “peacebuilding.” Japan moved vigorously to secure a leadership position in championing the concept of human security and provided substantial financial resources to the United Nations Trust Fund for Human Security (UNTFHS). This approach, however, unexpectedly faced a major difficulty in soliciting other member states` support. Japan learned a lesson and adopted more cooperative approach in establishing the UN peacebuilding architecture in 2005 and sharing its financial burdens with other partners. Japan also adopted a collaborative approach in managing the Tokyo International Conference on African Development (TICAD) which Japan established in 1993 and co-hosted with the United Nations and GCA (Global Coalition for Africa). China and the Republic of Korea have since set up similar institutions: the Beijing Summit of Forum on China-Africa Cooperation (FOCAC) in 2000 and the Africa-Korea Economic Cooperation Conference (KOAFEC) in 2006. Another thematic area in which Japan has made considerable technical contribution is the international efforts to stabilize greenhouse gas concentrations in the atmosphere. Following the adoption in 1997 of the Kyoto Protocol which extended the 1992 United Nations Framework Convention on Climate Change (UNFCCC), Japan has supported its signatory developing countries in reducing greenhouse gases emissions through transfer of Japanese technology and know-how.

In its future relationship with the United Nations, according to Professor Hasegawa, Japan will continue to aim at an honored place. Yet, its approach will place more emphasis on engagement in peace operations and norm setting than mere financial contributions which is expected to less than the large share of resources put forward during the 1990’s and the early years of the new millennium. Japan’s security force and material contributions to UN peacekeeping and peacebuilding missions will increase in line with new aid polices enunciated in its new ODA Charter of 2014. Japan will continue to advance and apply the concept of human security in the UN system and its contribution to the post-2015 development agenda with its emphasis on sustainable development, universal health coverage and natural disaster prevention and mitigation.