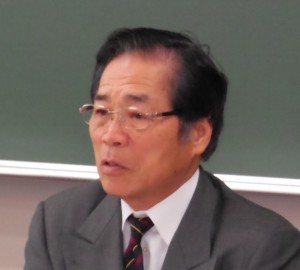 On 6 December 2014, Professor Yuji Suzuki of Hosei University delivered a lecture at the Global Peacebuilding Academy on the relationship between Southeast Asia and China. The lecture presented a highly instructive, macro perspective of the political, social and economic changes taking place in the Asian region.

Professor Suzuki advanced his thesis that China and ASEAN countries are, or will be, forced to make a transition from outward hegemony and internal authoritarianism on the one hand, to regional cooperation and domestic democratization on the other. According to Professor Suzuki, various countries in the world have moved through the stage of authoritarianism at different periods. Whereas Fascism and Nazism as an ideology reared its head in Europe in the 1920s and 30s, in Southeast Asia, authoritarian regimes arose in the 1980s as exemplified by Marcos’ rule in the Philippines, Suharto in Indonesia, and Mahathir in Malaysia. Yet by the late 1980s, Southeast Asia witnessed a trend towards democratization spurred on by the burgeoning demands of the expanding “middle class” in urban centres, and also partly by the so-called conditionality imposed by donor agencies such as the IMF. Around the same period, however, new types of authoritarianism were emerging in China and Vietnam (under communism) as well as Myanmar (under military rule).

Southeast Asia, since then, is evolving its own new regional integration model in the form of ASEAN Economic Community (AEC), one of the three more integrative attempts of the Vision 2020, which is to be distinguished from the older colonial models of development, as well as from the “Beijing Consensus” and from the Japanese model. This has become possible mainly due to a move away from regional hegemony and domestic authoritarianism common among ASEAN countries. We are yet to see where these trends lead. Professor Suzuki pointed out that it is unlikely that ASEAN will be able to present a unified position (or opposition) towards China. This is because ASEAN countries, despite regional integration and successful adaptation to globalization at home, are divided on a number of issues among themselves, not least the territorial conflicts which remain in the region, and which have become more pronounced as countries have begun to assert their sovereignty (such as the border disputes between Malaysia and Thailand, Cambodia and Vietnam, Indonesia and Malaysia). The major trade partners of the respective ASEAN countries also greatly differ from one another, indicating that the respective countries’ foreign policy interests are far from unified.

A key challenge the region faces is the growing socio-economic disparities between and within the countries. Whereas Singapore’s per capita GDP was US$46,241 in 2011, Myanmar’s equivalent was US$869. In the Philippines, there is a yawning gulf between those who form part of the “middle class” and those who fall outside that category, with crime and hate speech informing the relations between the two groups. The divide between the haves and the have-nots are even wider in Thailand. Furthermore, ASEAN countries experience the pressures of rapid urbanization as rural populations move to the city in search of better livelihoods. Professor Suzuki said that the only way out of this grave problem is for Southeast Asian countries to continue to develop economically so as to achieve the economic basis on which to build a functioning welfare state to assist those left behind the development process.

Another important trend identified by Professor Suzuki is the demographic transitions occurring in Asia. Most societies in East and Southeast Asia, with the exception of Malaysia, Indonesia, the Philippines, Vietnam and India, are aging rather quickly. Japan’s period of demographic dividend or “bonus” following its first and second baby booms ended in 1995, while for the Republic of Korea, Hong Kong, Singapore, China, Taiwan and Thailand, the bonus period for all of them is expected to come to an end in or around 2015. While Japan’s per capita GDP in 2011 was US$45,903, China’s was just US$5,430. The demographic structures in Asia are intricately connected with a country’s economic growth, and the figures point to a forecast that societies like China and Thailand may grow old before they can grow rich. On the other hand, Malaysia, Indonesia, the Philippines, Vietnam and India, have more time before their demographic dividend ends, and therefore greater potential to catch up to the per capita income levels of the developed world. With the close relationship between demographics and economics, Professor Suzuki stated that there may develop a competition between Asian countries to woo talented young labour from abroad to their countries through exchange programmes, scholarships and work schemes.

Professor Suzuki’s lecture generated a lively discussion, and comments and questions were heard from Ambassador Hanada (Former Ambassador to Timor-Leste), Assiciate Professor Higashi (University of Tokyo), Professor Ishizuka (Kyoei University), Ms. Dinara Kemelove from Kyrgyzstan, Mr. Yamamoto from Deutsches Institut für Japanstudien, and Professor Yonekawa (Rikkyo University). The seminar was closed by Professor Hasegawa who made a number of observations on the lecture with reference to Hegel’s notion of self-alienation as applied to a country’s democratization efforts and the return to authoritarian statehood in France and the Middle East. His concluding comment addressed the implications of the accelerated advancement of global capitalism in the world today.