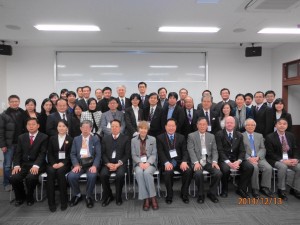 The 14th East Asian Seminar on the UN System was opened by Professor Keiko Oizumi of the Japan Association for UN Studies (JAUNS), Ambassador Chen Jian, President of the China Academic Net for UN Studies (CANUNS) and former Foreign Minister Han Sung Joo, Chairman of the Korea Academic Council on the UN System (KACUNS) on 13 December 2014 at Doshisha University in Kyoto.

The participants took up the theme of “the United Nations and East Asia: East Asian Leadership in Addressing Complex Regional and Global Problems.” During the first session, Mr. Yasushi Akashi, former Under-Secretary-General of the United Nations and Vice-President of the UN Association of Japan expanded his views on how to rebuild regional stability and cooperative relationship among the three East Asian countries and enhancing their leadership roles in the UN system. Mr. Akashi was joined by Ambassador Chen Jian, former Under-Secretary-General of the UN and President of CANUNS and Ambassador Young-Jin Choi, former Special Representative for Cote d`Ivoire (UNOCI) and former Vice Minister of Foreign Affairs of the Republic of Korea added their views that the leadership could be exercised by inspiring others with a shared vision.