On 1 July 20015, Mr. Yasushi Akashi, former Special Representative of the Secretary-General for the former Yugoslavia spoke to a group of policy makers, scholars and specialists at an international conference held in the Hague on the international decision-making process with reference to the Srebrenica genocide. 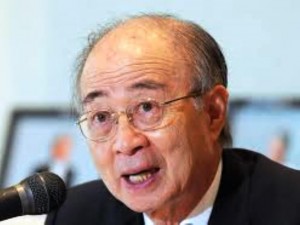 On this 20th anniversary of the unspeakable tragedy of Srebrenica, I offer, as the former Special Representative of the UN Secretary-General, my most sincere remorse for the sufferings caused to too many people concerned.

UNPROFOR was the largest peacekeeping operation in UN history. But it had to operate in Bosnia-Herzegovina in the circumstances most inhospitable for its work. It had to muddle through, when one of the parties in conflict wanted peace enforcement rather than peacekeeping, and the other party did not want any kind of UN peace operation at all. It must also be recalled that UNPROFOR was not given necessary means or resources by the United Nations for the implementation of very complex and ambitious tasks it was given.

I would like to say that the perfect solution is often an enemy of a good solution. We were aware what we all wanted was a durable peace. But under the difficult conditions we had to operate, our highest priorities at hand were humanitarian assistance for people who needed it and the attainment of cease-fires to stop the bloodshed, even if we knew they would be violated soon afterward.

You will remember that the European governments pressured UN Secretary-General Perez de Cuellar and his adviser Cyrus Vance to dispatch a peacekeeping force to West Balkans in the absence of a peace to keep. Furthermore, even after the European commission of wise men, headed by the French Minister of Justice Badinter, cautioned against a premature recognition of the new governments in the former Yugoslavia until constitutional consensus had been obtained among the ethnic parties within each countries, these European governments proceeded with their recognitions, which only hardened the positions of ethnic minorities in each country.

I note that several diplomats who represented their countries in the Security Council in those early days are present with us today in this room. Obviously UNPROFOR had to operate under the mandates negotiated by these diplomats and adopted by the UN Security Council. Indeed the Council kept issuing an innumerable number of resolutions and Presidential statements, which were all high-sounding but most difficult to implement for the people on the ground. Presumably this was the result of the pressures by member governments who felt that, in the light of agitated public opinion and the media in their countries, they had to show that they were doing something in response to the escalating violence. The resolutions, including the controversial resolution “836”, were adopted after complex compromises and tradeoffs which made it very hard for readers to comprehend the meaning of the texts. We on the ground read these resolutions ten, fifty times and even more, only to find they still did not make much sense.

We had an overall headquarters for our operation at Zagreb, Croatia, but our Bosnian regional headquarters was kept in Sarajevo for historical reasons. This made coordination between two headquarters rather cumbersome as the UN Secretary-General’s report (A/54/549) pointed out.

Cooperation between the civilian and the military branches was not easy but was largely attained. I am glad to add that there was a good relationship between the UN and NATO at the working level, despite some differences in their basic cultures.

In 1993, there was the debacle for peace-keepers in Somalia, Africa, which was followed by the haunting tragedy in Rwanda in 1994. Many of us in UNPROFOR told ourselves not to repeat the mistakes made in these past operations. We particularly cautioned ourselves “not to cross the Mogadishu Line” in Somalia, in which the United States lost 18 marines and Pakistan lost 24 troops in a most brutal fashion. This experience made a deep impression on us in Yugoslavia regarding a slippery road to peace enforcement and bloody conflict, when there was no such military capability and preparedness on the part of a peacekeeping operation. We perhaps tend to learn too much lesson from the operation immediately preceding the current one.

So far as Dutch troops guarding Srebrenica are concerned, it is remembered that the Dutch troops were sent there after Canada did not want to continue their tasks and Sweden refused to do it. In hindsight, the Dutch undertook an impossible task. However, how can you fight a war when you have only 150 troops left in the face of well-armed invading troops who exceeded 2,000. The Dutch troops had a serious shortage of food, water as well as medicine. They were also compelled to operate on foot for lack of fuel.

There was some persistent confusion as to the use of NATO air power. Despite our repeated attempt for clarity on common usage between “close air support” and “air attack”, not enough leaders were able to make a distinction between these two entirely different air operations. One was a clearly limited self-defensive action to protect UN personnel concerned, and the other was a political act with a concomitant danger of marking an enemy of the UN in the eyes of the recipient party.

We all appreciated the Dutch courage to undertake the almost impossible task in Srebrenica. I ask the Dutch people not to blame their troops or themselves too much. UN work is invariably difficult and at times even dangerous. It does not mean, however, that the UN is useless or is not doing their work needed for the peace of the world.

The “safe areas”, which is a misnomer, were certainly not safe without satisfying requisite conditions and circumstances. One party violated them constantly, and the other party used these areas as places where their troops were rested, reequipped and reembarked upon their assaults from. The UN Secretary-General kept telling the Security Council about these problems in several reports to the Council. He was seriously handicapped for not receiving additional troops he told the Council that he needed. In the former Yugoslavia, the UN personnel had to operate under a certain degree of vulnerability. Troop contributing countries were seriously concerned over the safety and security of their troops. What the UN could do in the “six safe areas”, including Srebrenica under the circumstances was very limited, and in hindsight was an almost impossible task.

In a larger perspective, the UN is constantly undertaking reforms, with a view to making its peace operations more effective and relevant to the changing demands of the world. One such example was the Brahimi report of the year 2000, a remarkable product of self-examination. In June 2015, another report by a committee headed by former President Ramos-Horta of East Timor was published, stressing the need for military action to be always accompanied by serious political processes for peace. I subscribe to these conclusions.

We should not focus only on the negotiators, generals and soldiers on the ground for not being able to make or keep the peace. High political leaders at capitals must also be alert to their vital tasks. In a larger picture, we need to balance justice with national reconciliation. There are many lessons we have to learn. The United Nations has to be involved in constant evolution. In the future, we would need a large variety of peace operations, starting from static, traditional ones, going through multi-dimensional operations and increasingly more robust types, particularly in failed or fragile states.