At Y7 Summit at Waseda University, youth delegates from G7 countries discussed, inter alia, how international security could be maintained. 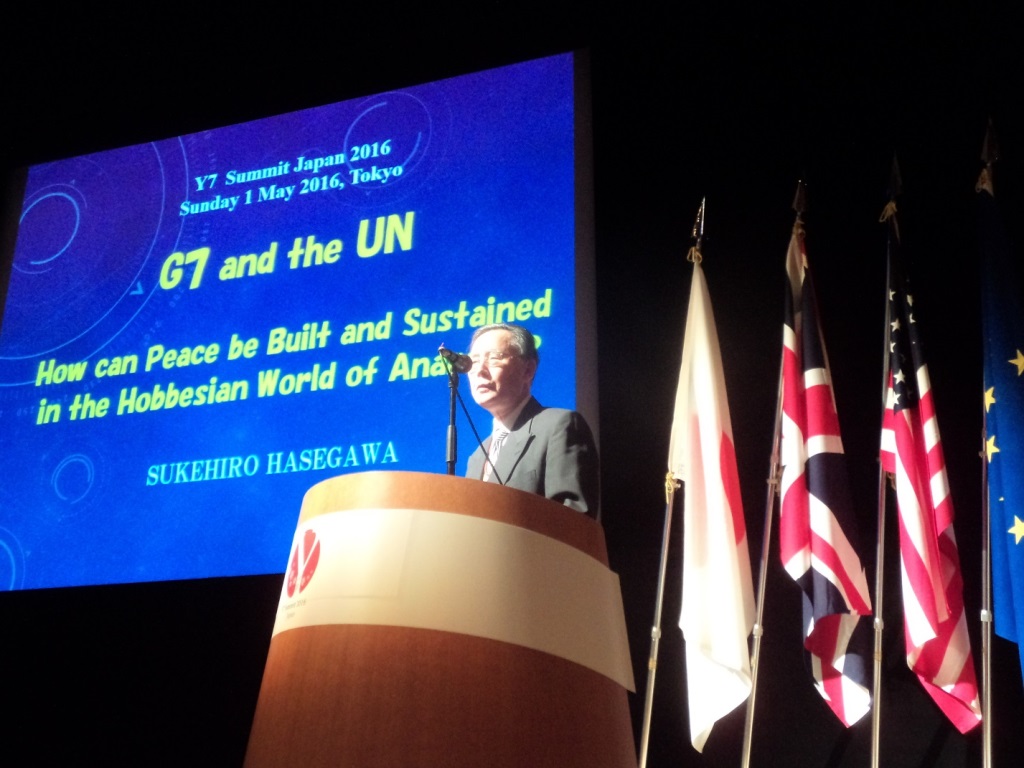 Professor Hasegawa delivered a lecture to young future leaders of G7 countries on the international peace and security “Reflecting Youth’s Opinions in the Changing World” Y7 Summit Japan organized by the youths of the 2016 G7 Summit participating countries and held at Iuka Hall, Waseda University, Tokyo, Japan, 1 May 2016. The following is a report filed by Mr. Takashi Kamishiro.

In his lecture “How can Peace be Built and Sustained in the Hobbesian World of Anarchy?”, Professor Hasegawa briefly explained how the United Nations’ Peacekeeping Operations (PKO) grew during the last 70 years by explaining its history and evolution. He referred to the importance of attaining peace as declared in Goal 16 of the UN Sustainable Development Goals (SDG): “Promote peaceful and inclusive society for sustainable development, provide access to justice for all and build effective, accountable and inclusive institutions at all levels”.

Following the basic principles of PKO, namely consent of the parties, impartiality, and non-use of force except in self-defence and defence of the mandate, the UN PKOs have been deployed since its first operation in 1948 to monitor the Armistice Agreement between Israel and its Arab neighbors. Once the genocide in Rwanda, where Professor Hasegawa was appointed as the UN Resident Coordinator and Humanitarian Coordinator in January 1995, the new approaches, such as the Protection of Civilians (POC) and robust operations (in 2000), Democratization (in 2005), and Primacy of politics (in 2015), were progressively introduced in the Peacekeeping Operations. Consequently, nowadays, many operations are shaped as the multi-dimensional missions, and take the integrated approach which the mission components and the UN agencies work together to carry out the mandates and to achieve the goals.

Seeking for the perpetual peace

Beyond the complexity of the current conflicts and the fact that its number has been increasing, Professor Hasegawa asked the audiences to think about the root causes of the conflicts.

Touching upon the characters of nations and the course of history which Dr. Henry Kissinger, Former US Secretary of State, categorized, or specific conceptions of “order” consisting of (1) the European system, specifically its Westphalian model of sovereign states with equal status within the system but now trying to form a union of states, (2) the American order, a dominant superpower since the World War I which has dominated the world but now under unprecedented pressure; (3) an Islamic system based on a wider idea of an ummah, or community, with a spiritual leader; and (4) a Chinese system based on traditional ideas of the Middle Kingdom as a great power.

Referring to Immanuel Kant, who introduced the categorical imperatives for perpetual peace, Professor Hasegawa proposed that seeking the truth and justice in a balanced manner would lead to the perpetual peace. Referring to the primacy of politics mentioned by Chair of the High-level Independent Panel on Peace Operations (HIPPO) José Ramos-Horta, Nobel Peace Prize Laureate and Former President of Timor-Leste, Professor Hasegawa emphasized that peace can neither be achieved nor sustained by military and security operations alone but by patient, steady, political engagements.

In this perspective, Professor Hasegawa cited the Art of War of Sun Tzu, the Seventeen-Article first Constitution of Japan drafted by Prince Shotoku, and the remark of the first US President George Washington to observe good faith and justice toward all nations, and cultivate peace and harmony with all.

By introducing the remark of Albert Einstein that problems we face today cannot be solved at the level of thinking we were at when we created them, the lecture concluded challenging the young audiences to think how to build and sustain peace by moving from the Hobbesian world toward the new world order anchored in global governance.

After the public lectures on the second day of Y7 Summit, the delegates from G7 countries held a wrap up discussion. 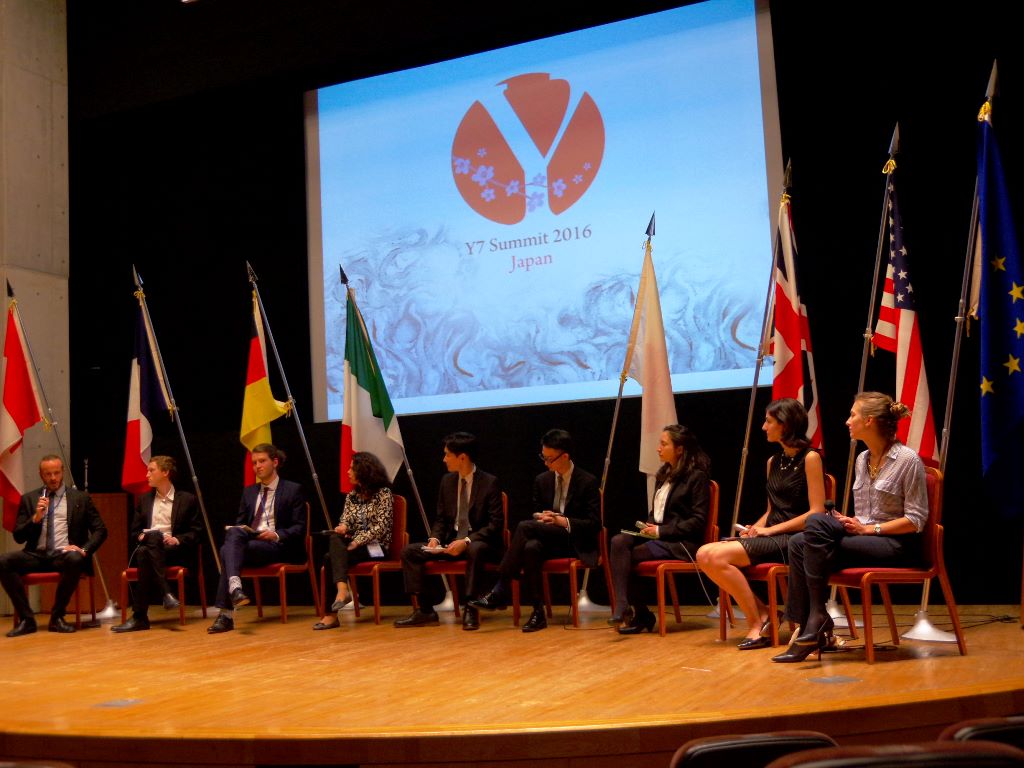 From left to right: Mr. Geremie of Canada, Mr. Shulz of France, Mr. Huebner of Germany, Ms. Realacci of Italy, Mr. Chiba of Japan and President of Y7summit, Mr. Yokono of Japan, Ms. Daud of the United, Kingdom, Ms. DeAngelis of the United States of America, and Ms. De Vestele of the European Union.

They discussed what they learned from the expert lectures, and how they made reference to them in order to reflect their opinions to the communique of Y7. Especially they discussed how to use the power of technology to the three agendas that included International Security, Labor and Economy and Sustainable Development.