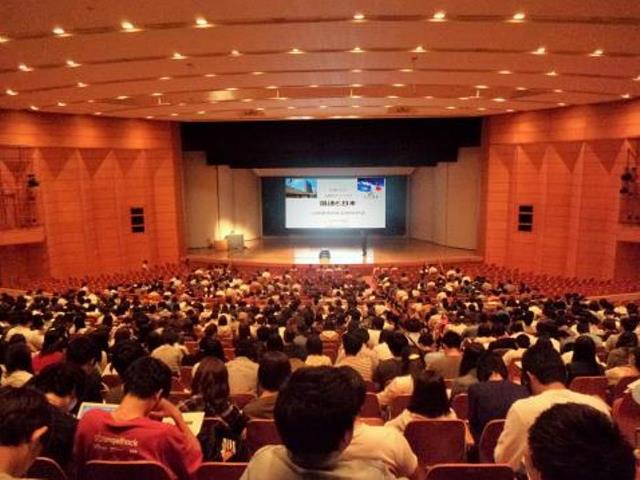 Professor Hasegawa delivered a lecture entitled “The United Nations and Japan” to about 700 students at the Tama Campus of Hosei University, Tokyo. As the guest lecturer for the course “Introduction to International Society” conducted by Professor Madoka Futamura in the Department of Sociology of Hosei University, Professor Hasegawa explained the issues which the United Nations (UN) tackles and how Japan has been contributing to the UN. He highlighted key lessons learned from his 37-year UN career working in the different countries and fields. Since the students possess a variety of interests as they study sociology, Professor Hasegawa discussed the issues concerning the United Nations` roles in enhancing global governance in maintaining international peace and stability, protecting human rights, fostering economic and social development, and preserving natural environment.

As is in the current globalized society, there is a need of establishing the rules for achieving peace not only among nations but also within countries. In this line, Professor Hasegawa explained that war has been one of the major reasons for establishment of international organizations. For example, the League of Nations was established to prevent any recurrence of a global war similar to the First World War. However, the League of Nations could not prevent the breakout of the Second World War, which caused the deaths of 60 to 80 million people all over the world. Following the several international conferences, such as in Moscow, Dumbarton Oaks and Yalta, the United Nations was established upon the Conference on International Organization in San Francisco, United States in 1945.

Professor Hasegawa briefly explained the concept and purpose of the UN Charter and its organizations. He touched upon the number of the member countries; the UN started with 51 member countries in 1945, and Japan joined the UN in 1956. Currently, 193 countries are the member states of the United Nations. 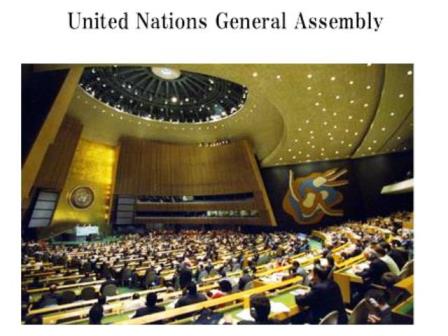 Professor Hasegawa explained the roles and the activities of the UN system, concerned with such goals as International Peace and Security, Humanitarian action, Economic and Social Development, Human Rights Protection, and Environmental Protection by referring to his UN career. About the role of UNDP (United Nations Development Programme), where he worked from 1969 to 1987, he mentioned UNDP proposed the concept of human development in 1990. and challenged the standard way of measuring economic and social progress by gross national product or GDP. The human development indicator (HDI) included not only the level of gross national product but also health and educational attainment as development indicators of the member countries. The UN initiative extended to the Millennium Development Goals (MDGs) established in 2000, which ranged from halving extreme poverty rates to halting the spread of HIV/AIDS and providing universal primary education, all by the target date of 2015, and 17 Sustainable Development Goals (SDGs) aiming for the year 2030. In this context, Professor Hasegawa shared a video showing Prime Minister Shinzo Abe launching the Human Development Report of 2014. It contained an alarming data that showed Japan`s rank in HDI had dropped to 17th down from the previous year. 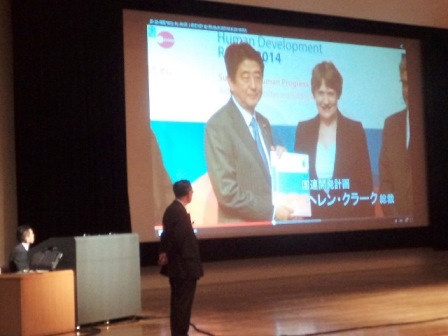 As the other UN activities, non-proliferation of nuclear weapons and the activities to tackle the climate change were presented. Professor Hasegawa found the significance of President Barack Obama`s visit to Hiroshima and the agreement reached in Paris to contain the rise of global temperature to 2 C degree.

Touching upon the World Humanitarian Summit held in Istanbul, Turkey in May 2015, Professor Hasegawa explained the types of humanitarian assistance; assistance to the aftermaths of natural disasters, such as the 2011 earthquake and tsunami in the Tohoku region of Japan, and another to the damages of the conflicts causing 60 million refugees and Internally Displaced Persons (IDPs) around the world today.

Professor Hasegawa explained his initiative while serving as the Deputy Executive Coordinator of the United Nations Volunteers (UNV) between 1987 and 1993 to deploy the volunteer personnel to the UN peacekeeping operations (PKO). More than 500 UNV electoral supervisors, including 30 Japanese, were recruited and dispatched to Cambodia. One of them, Mr. Atsuhito Nakata was assassinated in the course of his duties as a UNV District Electoral Supervisor with the United Nations Transitional Authority in Cambodia (UNTAC). Following the unfortunate death on duty of Mr. Atsuhito Nakata on 8 April 1993, his father Mr. Takehito Nakata decided to abandon his successful career in imports/exports in order to follow his son’s example in promoting the UN role in achieving international peace and democratic governance. Professor Hasegawa then mentioned that he had invited Mr. Nakata to become UNV’s Honorary Ambassador. As a result of the commitment of the Nakata family to the United Nations, many Japanese continued to volunteer for the work of the United Nations. This contrasted the abandoning of UN peacekeeping operations by the Japanese police authority which also lost one of its police officer, Mr. Haruyuki Takada, from Osaka who was also killed in Cambodia in 1993.

Concerning PKO, Professor Hasegawa highlighted the experiences in Somalia and Rwanda and explained two changes that took place in the international approaches. First change was in the operational modality and the second change the goal of UN peace operations.

The UN approach reflected first the reluctance of the US and European countries to be involved directly in Africa since the debacle in Somalia in 1993 and then reversal of their approach endorsing the active role of the UN in protecting civilians.

As for Somalia, Professor Hasegawa explained the involvement of the United States, who launched a humanitarian operation called the Operation Restore Hope in 1992 which initially turned out a successful operation saving a countless number of starving people. However, later the United States military component became engaged in combat operations in pursuit of one of the Somali faction leaders, Mohamed Farrah Aidid. There were several battles fought in Mogadishu in October 1993 between forces of the United States and Somali militiamen loyal to the self-proclaimed president, Mohamed Farrah Aidid. Somali militia and armed civilian fighters shot down two UH-60 Black Hawk helicopters and .killed 18 and wounded 73 US soldiers. This lead to the United States to withdraw from Somalia and not to participate in any UN peacekeeping operations in Africa since then. Today, it is significant to note that Japan along with China, Korea and Mongolia are engaged in one of the large UN peacekeeping operations in South Sudan in Africa. Professor Hasegawa explained the need to gain the understanding regarding the Japanese government’s strategic position towards PKO, such as the focus on logistical support from the international community.

In January 1994, immediately after the Rwandan Genocide, so called 100 days of slaughter, Professor Hasegawa was appointed as the United Nations Resident and Humanitarian Coordinator based in Kigali. He shared with the students the accounts of many human corps. He mentioned the reversal of international approach again. Whereas the international community almost abandoned the UN Peacekeeping Operations particularly in Africa, it recognized the international responsibility to protect people from threats. He then referred to the emergence of two concepts: Responsibility to Protect (R2P), a global political commitment to which the international society entails a responsibility to protect populations from atrocity and human rights violations, and Protection of Civilians (POC) based on the fact that 80 percent of the casualties caused by conflicts today are civilian populations. 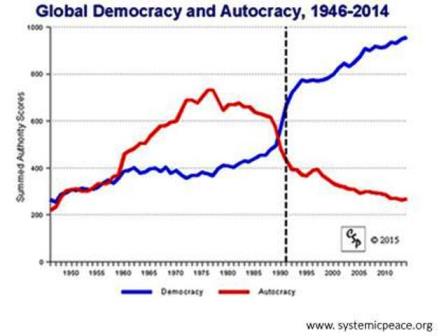 Professor Hasegawa also referred to the roles played by the United Nations in limiting the proliferation of nuclear weapons and dealing with climate change. The visit of President Obama to Hiroshima should give an impetus for non-proliferation of nuclear weapons. He also recognized as significant the agreement reached in Paris in 2015 to limit the rise of temperature.

As the conclusion, Professor Hasegawa explained the contributions of Japan to the United Nations. He explained the fact that the Japanese share of the financial contribution to the UN has declined compared to other member states particularly China, while the number of Japanese staff working for the UN is still to be increased.

After the lecture, Professor Hasegawa discussed issues and questions made by a group of the students. Mr. Akihiro Kimishima asked him the reasons why the UN Security Council has not been expanded and Japan has not yet become the permanent member of the Security Council. Professor Hasegawa explained its backgrounds oppositions to inclusion of specific members as well as the pressure from Africa for more seats. Some other students asked Professor Hasegawa about the refugee problem. He shared the data with the students that the European countries had received a large number of asylum seekers and migrants and Germany alone accepted more than 1 million of them that cost as much as monthly 2000 Euros per refugee and migrant. To show its solidarity with European countries, Japan has also agreed to accept 150 students from Syria. The number Professor Hasegawa found was minuscule compared with the number of refugees and migrants European countries are taking and also 12,000 students he had proposed in his opinion article contributed to Asahi Shimbun on 2 April 2016. Japan has been providing financial assistance in support of refugee camps in Jordan, Lebanon and Turkey.

By referring to a remark of Albert Einstein that the significant problems we face today cannot be solved at the same level of thinking we were at when we created them, he encouraged them to continue having interests in the current world affairs which the United Nations concerns.