At the meeting of CCCPA International Advisory Board, Director Ashraf Swelam identified newly “internationalized” conflicts and transboundary threats emerging in Africa and expressed his appreciation of support provided by Japan. 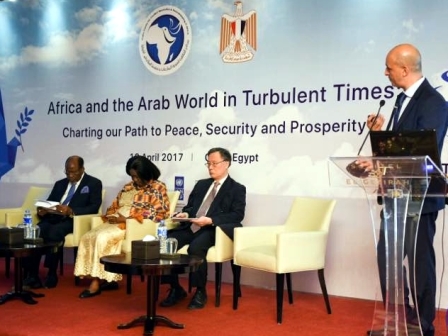 At the concluding dinner session of the International Advisory Board meeting of the Cairo Center for Conflict Resolution and Peacekeeping in Africa (CCCPA) held on April 10, 2017, Director Ashraf Swelam provided a comprehensive survey of newly “internationalized” conflicts and transboundary threats that no single nation can any longer contain within their own territory. This was followed by a panel discussion participated by Joaquim Chissano, Former President of Mozambique, Mary Chinery-Hesse, Former Deputy-Director General of the International Labor Organization and Sukehiro Hasegawa, Former Special Representative of the UN Secretary-General to Timor-Leste. 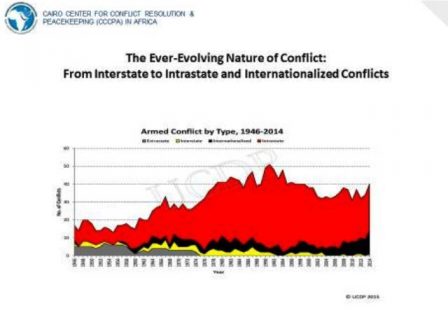 Intra-state armed conflict became the major type of conflict by the beginning of the 1990`s. By the turn of the century, international conflict that involved cross border activities started to emerge and increased in number, while intra-state conflict remained predominant. 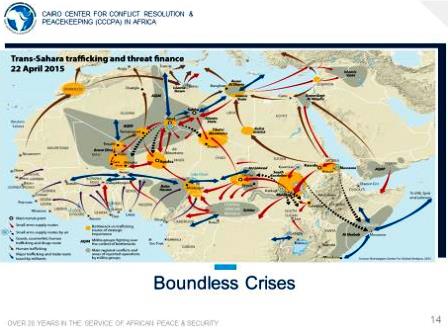 Human trafficking is the fastest growing business by which people are exploited and forced into slavery. Men, women and children in Africa are exploited and trafficked. The causes of human trafficking are complex, intertwined with global development, regional conflict, gender inequality, social instability and lack of education and awareness. This is compounded by the sophistication of global human trafficking rings which prey on vulnerable people, deceive them with false promises and hope, and separate them from their families and support structures. In Africa, countries act as both a “source” country for those that are trafficked and as a “destination” country where those who are victims of trafficking end up. Both internal and cross-border forms of trafficking are widely spread throughout the continent.

Director Ashraf Swelam further noted the return of geopolitics is enabling the spoilers of conflict to exploit the situation and compound the intractability of conflicts. 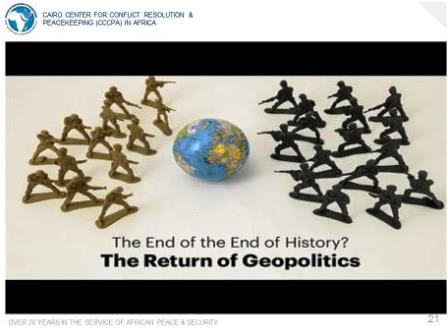 Director Ashraf Swelam also referred to the precarious situation women are now placed as, according to Major-General Patrick Cammaert, Commander of UN peacekeeping force, “It is now more dangerous to be a woman than a soldier in modern conflicts.” 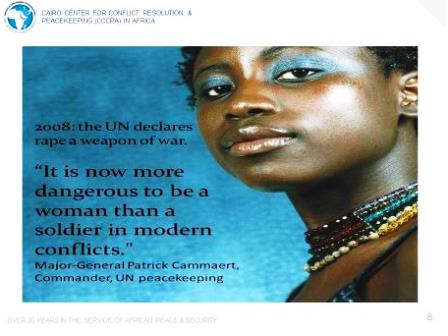 Director Ashraf Swelam reported that CCCPA is addressing these newly emerging conflicts and threats which included transboundary terrorism and human trafficking. He expressed his appreciation of support extended by Japan to enable the Cairo Center to deal with these issues proactively.