At the IAB meeting chaired by Professor Hasegawa, CCCPA Director General Ashraf Swelam explained the expansion geographical area and nature of CCCPA activities include the Arab region and more contemporary issues such as preventing radicalization and extremism, combatting human trafficking and smuggling of migrants, integrated DDR and women, peace and security.

In his presentation of the annual report, CCCPA Director General Ashraf Swelam informed the IAB members the expansion of its coverage that now includes Arab states and its thematic areas. He also indicated that he had taken over the Presidency of the International Association of Peacekeeping Training Centers (IAPTC). CCCPA Secretariat, he said, also assumed the IAPTC Secretariat until 2022 and Chairmanship of International DDR Training Group until 2019.

Swelam informed that CCCPA conducted in 2017 the regular pre-deployment training, senior mission leaders training and other UN training activities concerning the peace processes in Sudan, Libya and Syria. He then emphasized that CCCPA was now embarking upon research and training activities concerning (1) preventing radicalization and extremism, (2) human trafficking and smuggling of migrants, (3) integrated disarmament, demobilization and reintegration training group (IDDRTG) and (4) women, peace and security.

Director General Swelam`s presentation was followed by interactive discussion by the participants of the IAB meeting. IAB Chair Hasegawa highlighted key points made by the participants. They included the need to move forward with research and training activities in newly emerging challenges as mentioned by Director General Swelam and to strengthen the financial foundation of CCCPA. 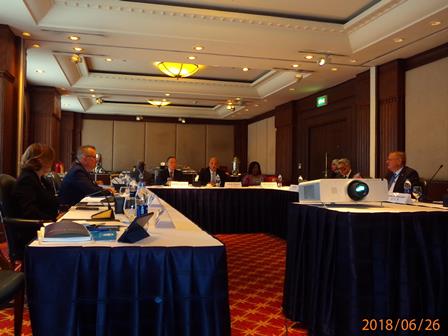 The International Advisory Board meeting was attended by Dr. Mary Chinery-Hesse, former Deputy Director-General of the International Labour Organization (ILO) and Chairperson of the UN`s Consultative Committee on Programme and Operational Questions for several years. Also present in discussion were Ambassador Mona Omar, former Deputy Foreign Minister for African Affairs and Ambassador Aly Erfan, Professor of the American University in Cairo and former senior official of the Ministry of Foreign Affairs of Egypt as well as Mr. Richard Dictus, Resident Coordinator of the United Nations System in Egypt.