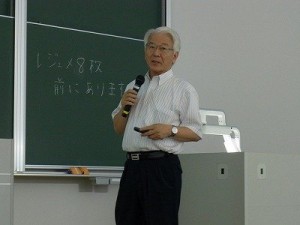 ＜Ⅰ．講義概要＞
１. Things to be Pointed
（１）Today, I want to talk about for sustainable future and how to understand environmental issues. I have things to be pointed out during this lecture. First point is balance between the capacity of the earth and human activities like pollution. Secondly, economical activities are major causes of environmental issues, but it is essential for human beings. Thirdly, solutions depend on Science and Technologies. Forth point is that fossil fuel, stored underground for more than 400 million years, causes Global Warming and Climate Change. Fifth point is solution. A possible solution for environmental issues is to restrict human activities within the capacity of the earth. However, nobody is convicted with the above solution. Although we have to know vast knowledge on the earth and human activities, total amount of knowledge exceed the capacity of the brain of one man. Anyway, I want to start to explain about the capacity of the earth. We emit green house gases including CO2. Green house gases will be absorbed by the ocean, but now we are consuming much fossil fuel, so the absorption of green house gases by the earth is much smaller. Also the energy supply and metal resources are current issue. Water and food resources depend on population.

２. Holistic View of History of Human Activities
（１）I’d like to explain about history of human activities especially economic activities. We depended much on agriculture about 100 years ago. Then we depended on several kinds of industries, textile industries, heavy industries, high value-added industry, information industry, service industry and financial engineering. And then Lehman Brothers went bankrupt in 2008. At that time, I thought bankruptcy will be the end of 20th century type of civilization because there is no future vision of the industries. According this sequence of development, some country including Japan think the green innovation and environmental technology can be the next economic technology.
（２）We invented agriculture about ten thousand years ago. How invented it is to depend on the change of global climate. The temperature of 20,000 years ago is about 6 degree lower than current situation due to glacial period. Although recovered from glacial period, the temperature went back very cold state 10,000 years ago from now. This period is called Younger Dryas. People worried about this situation because their lives on the shore went away. So it is difficult for them to survive. This is said the beginning of agriculture at this period of time.
（３）The invention of agriculture is one of a revolution for human beings, and second revolution is the Industrial Revolution. About 500 years ago, the temperature was getting cold again in Little Ice Age. During this period, people started to use coal for heat and started industrial revolution. And population has very close link to the industrial revolutions. The invented agriculture did not affect much population but industrial revolution caused sharp increase in population.
（４）CO2 emission started increase in 1850s because of much using of coal. From 1900s, people started to burn petroleum, so CO2 emission sharply increased after that. The figure of CO2 emission and the figure of world population are very similar. This says that population depends on energy consumption.
（５）As I said before, now we consume so much fossil fuel and it will be depleted in 2150-2300, so we have to take several criteria in 2150-2300. We should limit the global population less than 3 billion and the energy dependency less than 1/3 of current situation. We have to use renewable energy and materials and recycle all metallic elements forever. No wastes except for renewable. According to UN population projection, there are three kinds of population prediction. This scenario can be acceptable for survival of human beings. That means we have to start to decrease the global population until 2050, and energy consumption must be lower to 1/3 level. In the case of Japan, now Japan uses energy 4,000kg Oil Eq. per capita and this is about 2.5 times bigger than global average.

３．Status of Local Risks in Japan
（１）In 1960s, Japan started to increase energy consumption, and at the same time we experienced some pollution of environmental issues, so energy consumption and environmental pollution is in a very close relationship. Japan experienced Minamata disease and Itai-Itai disease and Amagasaki Traffic pollution at this period. Nowadays, we are facing sustainability issues.
（２）What is the economical situation at that time? GDP per capita of Japan was about 1/3 of the United States and almost half of Sweden in 1960. After that, Japan’s GDP per capita sharply increased and almost caught up the Sweden in early 1970s. And we started to adopt very strict legal framework for environment. However, this legal frame work did not affect much on the economy. On the other hand, in 1973, Japan’s GDP sharply decreased by Oil Crisis. This means energy affects much on economy.
（３）The percentage of polluted water decrease very sharply when we started strict legal framework for environment. This shows that we have to recommend all countries to strengthen environmental legal framework.
（４）Dioxin concentration in mother milk from 1973 to now is continuously decreasing. Actually, in 1999, Tokorozawa Spinach Issue occurred. There is a lot of industrial waste incineration in Tokorozawa. This period of time, everybody believed that dioxin can be made by burning waste especially plastic, but this trend shows none of such increase in dioxin concentration in mother milk, so it is something difference between them. We emitted much dioxin in 1960s-1970s.
（５）I will summarize trend of Japanese pollution and other environmental issues in terms of risks. Local risks such as pollution and dioxin are decreasing since 1970. However, nowadays global risks continuously increasing such as global warming, population, and food supply and so on.

４．What is Sustainability? What is Sustainable Development?
（１）Sustainability or sustainable development is defined by Brundtland Report in 1987. Sustainable development is the development that meets the needs of the present without compromising the ability of future generations to meet their own needs.
（２）The history of sustainable development started by the United Nations Conference on the Human Environment in 1972. This conference’s target was Japan because UN was afraid of Japan’s situation of pollution. In 1987, Brundtland Report was published as I already mentioned. In 1992, Rio Summit was held. In 2000, European countries tried to use environmental issues as to balance the United States and other countries, and also Millennium Development Goals were developed.
（３）The Millennium Development Goals are an ambitious agenda for reducing poverty and improving lives. The MDGs have 8 goals and first one is to eradicate extreme poverty and hunger. To ensure environmental sustainability is number seven not on first. Although global environmental issues were top in 1992, it was not in 2000.
（４）I want to talk about why MDGs claim to combat HIV/AIDS, malaria and other diseases. In 1995, life expectancy depended much on GDPs if the GDP was less than 5,000 dollars. However, its situation changed in 2001. At this time, some countries, such as Botswana, sharply decreased life expectancy less than 40, though the GDP was increasing. This is caused by AIDS.

５．Global Risks –Climate Change and Sustainability-
（１）I want to talk about global situation, not that of Japan. In Heiligendamm G8 Summit in 2007, the first statement for global warming was made. This statement includes at least a halving of global emissions by 2050.
（２）According to GHG scenario by National Institution of Environmental Studies, the limit of concentration of GHG is 475ppm in order to two degree is most safe level in temperature raises. In order to that, if we limit GHG 475ppm, we can achieve 50% reduction of GHG emissions.
（３）What is the international situation for developing countries? According to IPCC report in 2007, some developing countries, such as Myanmar and Cambodia, have to complete their economical development by 2030 and they have to start reduction of CO2 emission.
（４）CO2 emissions depend much on the situation of country. For example, Iceland uses this much of energy, but the emission of CO2 in Iceland is very small because they depends completely much on hybrid power, so we have to introduce some kinds of technology. We should try to save the energy more.
（５）We have to consider how to share the allowed CO2 emission between developing countries and OECD countries. It is impossible to reach the goal even emission from OECD countries is 0. This means that the reduction in developing countries is the important key factor.

６．Possible Scenario for Solution
（１）I would like to explain the concept of next stage for saving energy. In the case of efficiency of air conditioner in Japan, Japan introduced new legal framework ‘Top Runner’ and then trend in COP sharply went up.
（２）Cultural attitude towards energy use and comfort is different between Western Civilization and Japanese Civilization, Central Heating and Kotatsu. Central Heating is to heat up any place in the house and provide everything everywhere. However, Kotatsu is to heat up only limited space in the house and everybody shares the same place. The policy of Kotatsu is that it provides services only where it is really needed, when really needed, what really needed and quantity and amount really needed.
（３）I will introduce TV with motion sensor made by Sony. This TV provides picture only if you are in front of the TV. If you go out, this TV stops showing the picture. I think this is the Japanese mindset. In addition, Optimum transportation is the automobile which usually uses only for two persons with range of 30km.
（４）The consumption is quite different with countries. In Kuwait, there are 8 family members in big house. In Bhutan, there are 13 family members, and there is only one radio. In USA, they have a lot of items such as TV, car and so on.

２．About life expectancy
Q. You mentioned about exception of Luxemburg. What would be the capacity of factor caused increasing GDP per capita? Why life expectancy has been maintained?
A. This increase is supported by enough nutrition. If you take enough nutrition from food, ordinary people can reach up to 70. After that, this increase is attained by medical treatment for people. Even you advanced medical treatment to certain level, but again if you are very rich, you eat not so healthy food that will reduce life expectancy.

３．About energy
Q. If we reduce oil energy use, do we have to go back and do we have to be poor?
A. I do not think so. If we can increase efficiency of energy twice for example, then we can half our energy consumption. This kind of change can be available. This is the way we have to pursue.