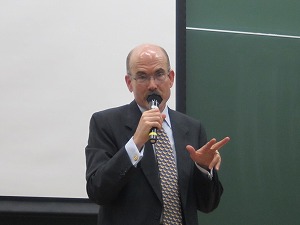 On November 9th, H.E. James P. Zumwalt, Deputy Chief of Mission of the US Embassy in Japan, came and made his speech in the Diplomacy class.
He delivered the speech on ‘The Next Steps: What lies ahead for the US-Japan Relationship’, after the opening speech by Professor Mori Satoshi, the Chief of the Department of the Global Politics.
In his speech, he especially focused on the following three points: security relationship, economic relationship, and people to people relationship. He also told with an emphasis that Japan and United States share common interests and values such as liberal democracy.
Following the keynote speech, under the Professor Suzuki’s moderation, Professor Mori and Associate Professor Meadows gave their comments. Then some students asked various questions to Minister Zumwalt.
After that, Professor Hasegawa lastly suggested to him, “Sharing common interests are important, but the economy is not everything. Moreover, we should share each other’s uniqueness and respect each other’s position.” (Dona Jung)