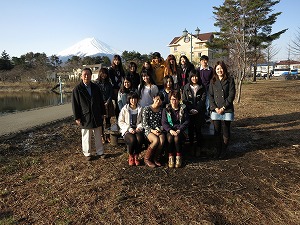 On 2nd April 2012, all of the seminar students were divided into three groups: the human rights group, the development economics group and the peace-building group, and each group determined their annual plan this year. Through all programs of that training camp, they could image a series of the seminar class and their motivation could be uplifted.
After that, they moved to the tennis courts by car, and played tennis. First, they played the one-on-one matches. The most of the games were seesaw game, and Professor Hasegawa was a very good tennis player. At last, Misa Komine won the victory. Moreover, they also played mixed doubles. However they couldn’t finish it because of lack of time.
Next, they came back to the hotel again and took their luggage then went to the station. They headed to Shinjuku by bus and they said goodbye.
The past three days, they had a great time to learn many things and deepened ties with the members of the Hasegawa seminar.