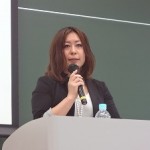 Today, Ms. Akari Kano gave students a lecture about the financial basis and resource in international organizations. The UN budget is determined in accordance to the principle of equal sovereignty. Member nations pursue their own interests, so the budget is said to have a political aspect. The UN has been operating on a smaller budget than generally believed. Recently, the UN came to deal with non-traditional security issues, so the budget has been increasing. There are some committees in the UN related to the budget, and they support the General Assembly. Financial resources of the UN are various. Commonly known are the expenses shared by member states of which Japan is the second largest. A share of expenses will be assessed by a certain equation, and this has been in line with world affairs. The UN is faced with financial difficulties because member nations do not pay their share of expenses. The US is falling behind payments totaling four hundred million. There are various reasons why member nations do not pay their share of expenses. Introducing international solidarity tax may be mentioned as a means to solve this matter. Japan has played an important role in the UN finance. However, Japan should not only make a financial contribution, but should also take leadership in terms of other areas. (Moe Kurisu)