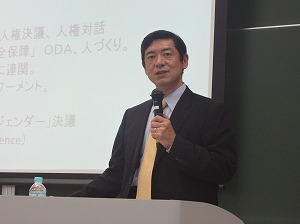 On May 29th, 2012, Mr. Akio Miyajima, Deputy Director-General, Foreign Policy Bureau of the Ministry of Foreign Affairs visited our University and gave a lecture in the Diplomacy class on Japanese UN diplomacy on human rights. First, he outlined basic concept of human rights and shared the class with recent news reports and focused on the history of human rights, important advancements and setbacks including genocides, after the WWII. Second, he explained on UN’s effort on human rights, its achievements as well as limits. He cited important UN agreements including UN Charter and World Declaration on human rights. He also talked about the new concept of “Responsibility to Protect(R2P)”. When human rights of civilians are not by their government, who should protect them? What is the responsibility of international community? Finally, he explained on Japanese diplomacy on human right and emphasized that Japan basically relies on “dialogue and cooperation”approach and has employed “human security” as important implementing perspective. He talked about efforts on UN human rights resolution. He distributed copy of Statement by Mr.Yamane, Senior Vice-Minister for Foreign Affairs at Human Rights Council High-level segment in Geneva which highlighted Japanese efforts on human rights both at international level and at home. (Risa Kato)