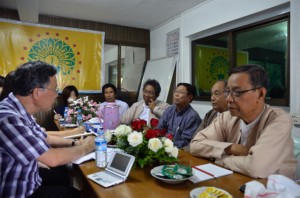 On 25th August, the Hosei study group met with U Thu Wai, Chairman of the Democratic Party, Dr. Than Nyein and Dr. Win Naing of the National Democratic Force and U Myo Nyunt of the Democratic & Peace Party.
They explained the current political situation in Myanmar and confirmed that a real change was taking place. President Thein Sein was implementing a number of political reform measures such as freedom of press and foreign investment. They also explained changes proposed in the electoral law in order to achieve proportional representation. Concerning the economy, they informed the students that the government would like to introduce a free market economic system, including Myanmar and foreign joint investment and business ventures. According to U Myo Nyunt, the government and minority ethnic rebel groups were reaching peace agreements. Ms. Kameyama asked if any of the political parties was bringing up the young generation into their leadership positions. Dr. Than Nyein responded positively and agreed to the necessity to give more opportunities to young people.(Kotaro Takahashi)