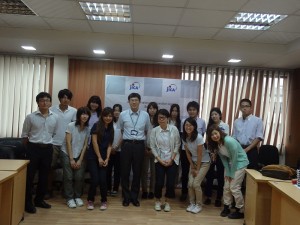 On 5th September 2012, the India and Bangladesh study group visited JICA Dhaka office in Bangladesh and Mr. Imai, the vice-chief in JICA Dhaka office, gave us a presentation following four points. At the beginning of the presentation, he briefly gave us the information of Bangladesh such as population, religion and so on. Secondly, he mentioned the situation of economy of Bangladesh. He said the Bangladeshi government aim to enter the middle class countries until 2021. Then he explained the situation of investment from Japan and also the attractive points of it. Finally, he introduced the results and principle of Japan’s ODA and also JICA’s projects such as infrastructure in India. (Aimi Ezawa)