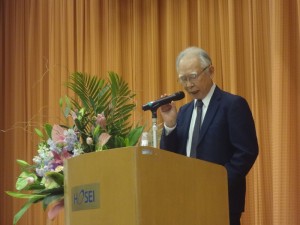 On December 4th, an international symposium on “Humanitarian Diplomacy: Diplomats Who Saved Jewish People” was held at Hosei University. In this symposium, Hayoto Takeuchi and Yuka Narikawa of the Seminar Class acted as masters of ceremony. First of all, President Toshio Masuda gave an opening address. Then, Mr. Ulf SÖRMRK, Minister-Counsellor of the Kingdom of Sweden, Mr. Peleg-Pablo LEWI, Acting Ambassador of Israel, and Mr. István GERELYES, Minister-counsellor of Hungary, made the audience welcoming remarks. After that, Ms. Fumiko ISHIOKA, Representative of the Tokyo Holocaust Education Resource Center, and Professor Hasegawa gave them keynote speeches.
Ms. Ishioka told them about the accomplishments of Mr. Raoul Wallenberg and their significance and Professor Hasegawa indicated the accomplishments of Mr. Sugihara Chiune and insistence on humanitarian diplomacy and global justice in the context of the Westphalia world of nation states of which concern has remained national security and interest. Various issues and opinions were then expressed by three panelists: Mr. Masaaki SHIRAISHI, Deputy Director Diplomatic Archives of the Ministry of Foreign Affairs of Japan, Professor Mikiko ETO, Department of Politics, Faculty of Law, and Dr. Vesselin POPOVSKI, Senior Academic Programme Officer of the United Nations University. The discussion became lively and heated at a time. After panel discussion, a few participants, including Keiki Takemasa of the Seminar Class made comments, on the presentations and asked questions.
At the end of the discussion session, Professor Hasegawa a summary of views expressed and Professor Yoshiro Fukuda, Hosei University Executive Vice President, gave closing remarks.
Hayoto Takeuchi, Yuka Narikawa and Minshik Kim acted as masters of ceremony and Keiki Takemasa of the Seminar Class asked commented on the presentations and asked a question.