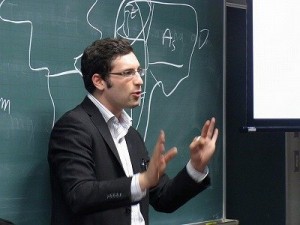 In today’s seminar, we started by discussing and sharing our problem about manners and the correct way of mailing. Then we invited Mr. Hillel Loew and he gave us a quite interesting presentation on the subject of French foreign policy and the UN agenda. The presentation began by the explanation of political history of France which gave us a clue to understand why France could become so important actor in the international politics and how they gain their interest such as putting a special emphasis on soft power rather than military or economical power. Furthermore, he explained the French policy on energy, economy and human rights. On the policy on energy, nuclear energy which France is keenly promoting has not only environmental reason but also political and economical reason. On the policy on economy, he explained mainly about the financial crisis in Greece and the economical cooperation among the EU countries. He also explained how big part France had played in making human rights a universal value. Finally, we had a very interesting discussion about the bill to abolish “burqa”.(Misu)