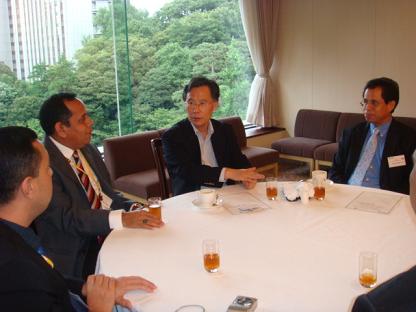 Professor Hasegawa accompanied by his assistants Kisyo Tsuchiya and Yuho Nakagawa met with Thomas Cabral, Director of the Technical Secretariat of Electoral Administration of Timor-Leste and his delegation on Monday, 12 July at Happo-en. They visited Japan from 7 to 13 July as part of the “Election Visit Programme” to observe the elections of members of the House of Councilors of the Diet of Japan. At a recption held in honor of nearly 40 observers from Asian and Pacific countries, Mr. Eiji Yamamoto, Assistant Vice-Minister for Foreign Affairs of Japan gave an opening speech, and then Dr. I Ketut Putra Erawan, Exeuctive Director of Instittue of Peace and Democracy made a statement on behalf of the visiting officials from Australia, China, East Timor, Indonesia, Malaysia, Republic of Korea, New Zealand and Vietnam. (Yuho Nakagawa)