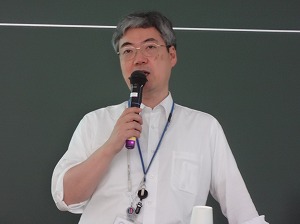 On June 19th 2012, Mr. Kazushige Taniguchi, Special Representative from Japan for The World Bank, visited Hosei University and delivered a lecture on The World Bank in The Multi-Polar Economy. First, he insisted on the Developing Countries’ Rising Role and background of developing countries. Although developing countries are playing a key role in the global growth, those countries still have some issues. For example, high percentage of population without access to electricity, excessive numbers of deaths of female population and children under the age of five and high emission of CO2. Second, he made statements on Japanese economy and population. Total Population of Japan has been continuously decreasing since 2005, the year which the peak of the Japanese population was at and GDP of Japan is not growing after the collapse of Japan’s economic bubble. Finally, Mr. Taniguch explained general description of The World Bank. He said that The World Bank is the largest international development financial institution in the world and provides long-term development assistance to developing countries by cooperating with The International Monetary Fund (IMF) in comparing countries. He also explained about “World Bank/International Monetary Fund Annual Meetings” that is to be held in Japan this year. (Minako Ishikawa)