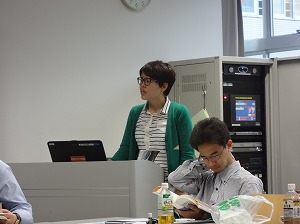 On 19th June 2012, following presentations made by the Economic Development group, the seminar first discussed how a triple transformation took place in peace operations comprising quantitative, normative and qualitative changes. Following the end of the Cold War, the United Nations began to implement complex operations addressing the causes of intra-state conflicts and transform war-torn societies by fostering human rights and democratic governance. The seminar then studied the recommendations made by the Brahimi Report through improvements in making decisions at UN headquarters and enacting mandates by the Security Council, securing of resources, deploying peacekeepers and carrying out operations robustly. Further reform proposals were presented to the General Assembly by the Secretary-General based on the recommendations of the high level panel on threats and challenges to the international community. The General Assembly then adopted a resolution commonly called the Outcome Document and established a Peacebuilding Commission and a standing police capacity and endorsed the notion of the responsibility to protect (R2P). The United Nations, through adoption of the Capstone Doctrine, also added three principles, credibility, legitimacy and national ownership to its existing principles of consent, impartiality and non-use of force except for self-defense. (Yuna Kitamura)