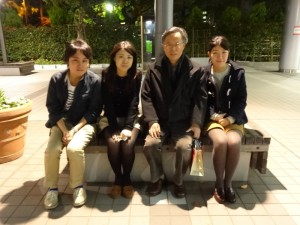 On 28 November 2013, Professor Hasegawa visited the Kurosawa seminar for the first time in almost one year. In this seminar, first, five students made presentations about the peacebuilding in Timor-Leste referring to Chapter 5 to 8 of the “Primordial Leadership” written by Professor Hasegawa.
In the presentations of the transitional justice in Timor-Leste, Mr. Kohei Yokota and Mr. Yasuki Uchiyama explained the activities of Commission for Reception, Truth and Reconciliation in East Timor (CAVR), The Serious Crimes Process (SCP), the recommendation of The Commission of Experts (COE) and issues of The Commission of Truth and Friendship (CTF) including ways of thinking of Timor-Leste’s leaders. Then some issues and forms of transitional justice, the differences among ICTY, ICTR, Special Court for Sierra Leone and Special Panels for Timor-Leste were pointed out and examined.
After that, Ms. Mai Uchida and Mr. Junho Yoon referred to the transition to a sustainable development framework from Peacekeeping or Peacebuilding. In their presentations, they discussed some issues such as the premature withdrawal of UNMISET, and opinions of several interested countries. In addition, they reviewed the process of transition to a sustainable development framework.
Then Mr. Keiki Takemasa referred to the composition and roles of missions from UNTAET to UNMIT and how the structure and nature of peacebuilding missions changed in Timor-Leste. He pointed out that peacebuilding are long-term tasks quoted from the words of Mr. Kofi Anan.
Following the students presentations, Professor Hasegawa explained the implications of various measures and programmes with the use of photos taken at the time in Timor-Leste. Then he elaborated the differences between rule of law and rule by law, frame of reference of Timorese leaders, the differences between retributive justice and restorative justice, what the means of enhancing ownership are and his own view of conflict tree. (Yasuki Uchiyama)