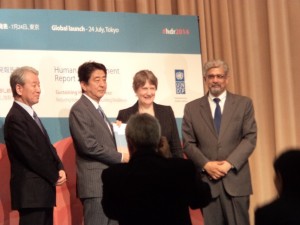 Japan ranked 17 out of 187 countries in terms of its HDI value of 0.890 in 2013. Japan continues to belong to the very high human development group that had the average of 0.876 for countries in the OECD. The countries with higher HDI values than Japan were Norway, Australia, Switzerland, Netherlands, the USA, Germany, New Zealand, Canada, Singapore, Denmark, Ireland, the UK, Hong Kong and Republic of Korea. In 2013, South Korea had mean years of schooling and expected years of school that were higher than those of Japan, while the life expectancy at birth and the gross national income per capita of Japan remained higher than those of South Korea. The 2014 HDR introduced a new measure called the Gender Development Index (GDI) which represented a ratio of the female to the male HDI. The GDI measures gender inequalities in achievement in three basic dimensions of human development – life expectancy at birth, education, and GNI per capita of females and males. The GDI value for Japan was 0.951 compared with GDI values for South Korea of 0.940 and the United States of 0.995.