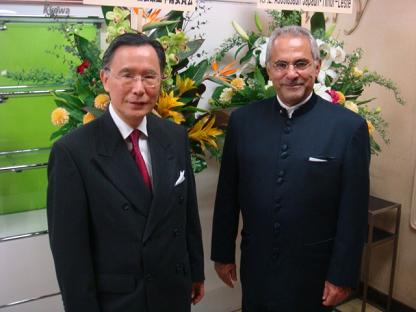 On March 16, Professor Sukehiro Hasegawa met President Jose Ramos-Horta of the Democratic Republic of Timor-Leste as well as Japanese Ambassador Kitahara. President Ramos-Horta was visiting Japan at the official invitation of the Government of Japan from March 16 to 19, 2010. Prime Minister Yukio Hatoyama hosted a dinner for President Ramos-Horta. The President also met with Foreign Minister Katsuya Okada and Speaker of the House of Concillors Satsuki Eda. President Ramos-Horta then proceeded to the Kansai area and Hiroshima where he delivered a speech on world peace.