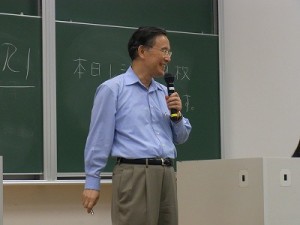 Professor Hasegawa delivered a lecture on 7 July on the idea of global public goods and the significance of protecting them in the era of globalization. Global public goods are common property and rules for all people on Earth and need preservation. He gave as examples oceans, water and air and also mentioned human rights and freedoms as inviolable rights of all people. . He then explained how the notion of human rights’ was advanced by John Locke, Jean Jacque Rousseau, and Baron von Montesquieu and reflected in US Declaration of Independence, French Bill of Rights, and UN Universal Declaration of Human Rights. Noting that the idea of human security has emerged as important along with national security, Hasegawa also explained about various definitions of human security made by Canada, Japan and UNDP, with Japan stressing that human security consisted of freedom from fear as well as freedom from want. Hasegawa also analyzed the doctrines of humanitarian intervention and the responsibility to protect (R2P), recollecting his memories of what happened with the genocides that took place in Cambodia in 1970`s and in Ruanda in 1994. In conclusion, he provided the students with two contrasting views held by the advocates of Cosmopolitanism and Communitarianism about the norms and standards that should or should not prevail in a globalizing world. (Yusuke Noda)