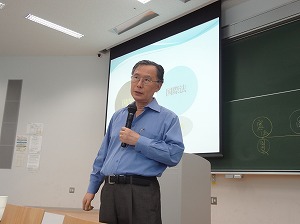 On 11th July 2012, in his the end-of-semester lecture, Professor Hasegawa reviewed first the changing roles of international organizations.Then he introduced the theories of Functionalism and Neo-Functionalism developed by David Mitrany and Ernst Haas respectively.
Second he reviewed the birth and growth of international organization. He explained the causes for and lessons learned from the collapse of the League of Nation. Professor Hasegawa then presented a practical overview of the key issues arising in the relationship between international law and national law. Most of the countries accorded the highest authority to their national constitutions and tried to accommodate international treaties into their domestic legal system once their legislatures have ratified them.
Professor Hasegawa explained the differences in how respective countries have dealt with the international legal agreements. In case of Japan, its constitution in article 98 stipulates the following: (1) this Constitution shall be the supreme law of the nation and no law, ordinance, imperial rescript or other act of government or part thereof, contrary to the provisions hereof, shall have legal force or validity; (2) the treaties concluded by Japan and established laws of nations shall be faithfully observed.
Finally professor Hasegawa explained the need for the Japanese to play a more active role in international organizations.
(Yuhi Kawase)