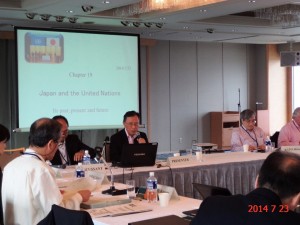 An authors’ workshop was held in Sapporo, Hokkaido on 22 and 23 July in preparation for publication of a book, “Japan and the Developing World: Sixty Years of Japan’s Foreign Aid and the Post 2015 Agenda.” At this workshop organized by Japan International Cooperation Agency (JICA), Professor Sukehiro Hasegawa presented his draft chapter on “Japan and the United Nations: Its Past, Present and Future.”

In his chapter, Professor Hasegawa explains that, since Japan became a member of the United Nations in 1956, Japan has made strategic use of the United Nations and its associated agencies for the purpose of not only enhancing its commonly-known national interest but also occupying “an honored place” in the international community. The desire to occupy “an honored place” constituted a symbiosis of aspirations and concerns held in the hearts and minds of the Japanese people about Japan’s place and its obligations towards other members of the international community. It differed conceptually from the narrowly defined “national interest” often cited by the practitioners and scholars of foreign aid. Its achievement cannot be measured easily by quantitative indicators as it is a non-material relational outcome of interactions between Japan and other members of the international community.

The pursuit of an honored place has manifested in Japan’s strategic approach to the UN. The meaning of an honored place as a goal and the means to attain it have changed over time as their understanding of the expectation of the international community changed along with the transformation of what constitute the desirable mix of contributions to the UN system. Japan first became a benefactor of development and humanitarian assistance. When this was found not sufficient to earn an honored place, Japan adopted neo-realist and constructivist approaches with the deployment of Japanese self-defense forces and active participation in formulation of global policies, norms and standards.

Japan now faces a conundrum and finds itself in a state of dilemma. Having felt shamed by lack of international appreciation of an enormous amount of money donated to the coalition forces to expel the Iraqi forces from Kuwait in 1991, Japan decided to start sending its SDF troops to participate in UN and other multinational forces at the urging of the United States. This led the United States to increase its confidence in Japan to the extent that it has indicated publicly its support for Japan`s entry to the Security Council as its permanent member. Yet, this neo-realist approach has caused anxiety and misapprehension of neighboring countries, particularly China and the Republic of Korea which opposed to Japan`s accession to the Security Council seat in 2005.

Since Japan’s became the member of the United Nations in 1956, Japan has pursued its quest for “an honored place” and is expected to continue doing so in future. It can be a seat – permanent or non-permanent – of the UN Security Council or one held in the minds of global leaders and peoples of the world. Japan should not just remain a seeker of an international status but one who actively help transform the structure, norms and standards of the international community that would enable more benefit of peace and development to reach a larger number of vulnerable and disadvantaged people around the world.