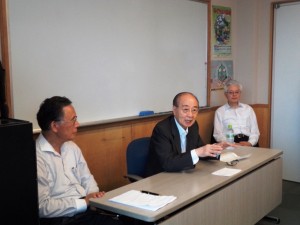 From 18 to 20 July, an orientation seminar was held at the Tokyo Olympic Memorial Center in Tokyo for 20 students who are participating in the Xi`a tripartite youth seminar in mid-September. The students received briefings and lectures from Mr. Yasushi Akashi, vice-president of the UN association of Japan, Ambassador Kenzo Oshima, member of the Japan nuclear regulatory commission, Dr. Kazuhiko Takemoto, Director of the UNU institute for advanced study of sustainability, Professor Katsuhiko Mori of the International Christian University as well as Professor Tatsuro Kunugi and Ms. Kim Kumi of the UN association of Japan. The seminar was directed by Professor Sukehiro Hasegawa and Mr. Sho Tsuyuki.

The orientation seminar consisted of three parts. The first part was for the students learned about the attributes and understandings required for effective inter-cultural communication on various issues including the historical development leading to the World War II as well as the teaching of Lao Tzu and Taoism.

The second part consisted of a series of lectures given by the guest speakers. Mr. Yasushi Akashi provided the students with his views on the role of the United Nations and international relations surrounding Northeast Asia. He also commented on the presentations made by the students on how they can play a role in developing East Asia Partnership. Commissioner Kenzo Oshima spoke about the outcome and implications of the Fukushima nuclear power plant explosion and the prospect for establishing a nuclear safety network among Japan, China and South Korea. Dr. Kazuhiko Takemoto made a detailed explanation of the environmental problems of Northeast Asia such as air pollution, water contamination, soil erosion, deforestation and nuclear radioactive waste. Professor Katsuhiko Mori gave a lecture on sustainable development and post-2015 development agenda. Professor Tatsuro Kunugi gave an overview of how the trilateral youth forum had started and developed into a major event for the students of the three countries to exchange their views and ideas.

The third part of the orientation seminar was devoted to the model United Nations process. After receiving a briefing, the students practiced their negotiation and voting exercise.