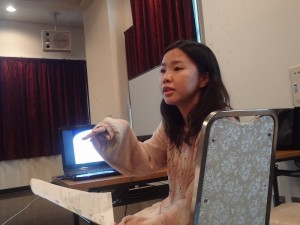 On 16th November 2012, before the autumn-camp of the Hasegawa seminar class, Professor Hasegawa and four students spent a day and they learned on Justice that Professor Michael J. Sandel analyzes in his lectures at Harvard University. The students made their presentations of the four chapters.
First, Ms. Misa Komine gave an example of conscription system and surrogate birth based on her reading of the chapter 4. Next presenter, Mr. Yasuki Uchiyama, explained John Rawl’s philosophy, “A Theory of Justice”, contained in the chapter 6. The third presentation was made by Mr. Keiki Takemasa, and he summarized the issues of affirmative actions in the chapter 7. Finally, Ms. Yui Narikawa mentioned the dilemma of loyalty in the chapter 9.
The presentations by four students followed viewing of the video recordings of the actual lectures delivered by Professor Sandel. These video recordings enable the students to enhance their understandings of various issues pertaining the concept of justice.
(Misa Komine)