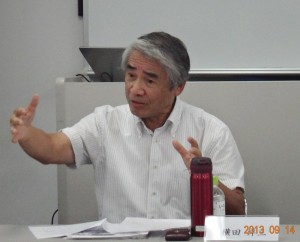 The Peacebuilding Study Group held on 14 September a seminar on the applicability of rule of law in settling international disputes. It centered on the presentations made by two guest speakers, Professors Yozo Yokota and Yasushi Higashizawa and comments by Professor Hideaki Shinoda and Mr. Shinpei Yamamoto. Introduced in the presentations were the relationship between domestic and international laws as explained in “Rule of Law – A Guide for politicians” by Professor Higashizawa of Meiji Gakuin University, and the legal issues arising out of the territorial disputes of the Senkaku Islands between Japan and China by President Yokota of the Japan Association on United Nations Studies.

In his presentation, Professor Higashizawa discussed the development and effectiveness of international law in the settlement of international disputes and the emergence and roles played by the International Criminal Court. After analyzing the relationship between domestic and international laws, Dr. Yokota focused on the legal basis of Japan’s ownership of the Senkaku Islands and mentioned how this is disputed by China. This legal basis centered on historical records of the territory.

Captain Hideki Hayashi of the International Peace Cooperation Center, Joint Staff College, Ministry of Defense, acted as the master of ceremony and Professor Sukehiro Hasegawa, President of the Peacebuilding Study Group, presided over the seminar and made concluding remarks.