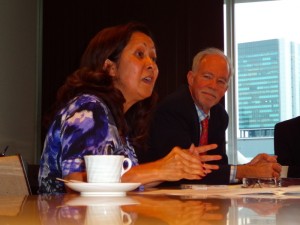 On 14 March 2014, Timor-Leste Finance Minister Emilia Pires, who was member the United Nations Secretary-General’s High-Level Panel of Eminent Persons on the Post-2015 Development Agenda, explained how the new development goals were established with inclusion of the need for good governance and effective institutions as well as stable and peaceful societies as 10th and 11th goals of new MDGs. In her conversation with Rector David Malone of the UN University, she also provided detailed accounts of peace and state building challenges faced by Timor-Leste and other conflict prone countries. She emphasized the need to hold genuine partnership between host and donor countries by asking that the donor and partner countries talk “nothing about us, without us.”
The Post-2015 Development Agenda was proposed by the High Level Panel appointed by UN Secretary-General Ban Kim-moon as a new agenda to succeed the UN Millennium Development Goals (MDGs) that ends in 2015. With its title, “A New Global Partnership: Eradicate Poverty and Transform Economies through Sustainable Development,” the report sets out a universal agenda to eradicate extreme poverty from the face of the earth by 2030, and deliver on the promise of sustainable development. To achieve the new post-2015 goals, the Panel proposes several transformative shifts in the global approach towards development and calls upon the world to rally around a new Global Partnership that offers hope and a role to every person in the world. Minister Emilia Pires of Timor-Leste was one of 27 members of the Panel that started its work in August 2012 and completed its work in May 2013.