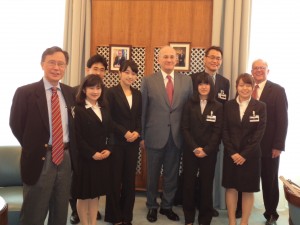 From 29 April to 5 May 2014, two professors and four students of the Gakushuin Women`s College visited the UN Office in Geneva and other international organizations and received a series of briefings from their officials and retired former international civil servants. The group consisted of Professors Takafumi Nakajima and Daizo Sakurai along with Miss Nozomi Matsuo, Mariko Migita, Fumika Tahara and Saya Yamaguchi.
They were met first by Mr. David Chikvaidze, Chef de Cabinet of the United Nations Office who briefed them about the role played by the UN Office at Geneva. They were then shown the Library by Ms. Maria Teresa Castaneda and Ms.Yu Ohyama. The tour included a visit to the League of Nations Museum. Later in the day, the group received an introductory lecture by Professor Sukehiro Hasegawa about the League of Nations and the United Nations. The group subsequently visited ILO, ICRC, UNICEF, DACAF, UNHCR, IOM and WHO. They also received briefings about human resources policies of international organizations from Mr. Yorio Tanimura and Ms. Akiko Kojima. The group also visited the 28th Geneva Book and Press Fair, in which some aspects of Japanese culture were presented by the Permanent Mission of Japan to the United Nations and Other International Organizations in Geneva on the occasion of the 150th anniversary of the establishment of the diplomatic relations between Japan and Switzerland. On Saturday, 3 May, the group was invited by Mr. Alain Dick, former Chef de Cabinet of the Director-General`s Office and special advisor to former President of Timor-Leste Jose Ramos-Horta for a lecture and dinner at his residence in Bain-Divonne, France.