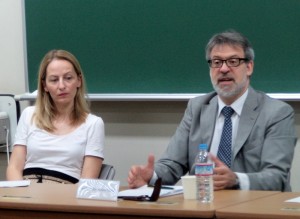 We had an honor to welcome His Excellency, Mr. Nenad Glišić, Ambassador of the Republic of Serbiato speak at a seminar organized by the Japan Academic Council on International Peacebuilding (JACIP) on July 12, 2014.Ambassador delivered a lecture entitled “Serbia’s challenge in light of its special emphasis on the Kosovo issue.”

The Ambassador stressed that Serbia is a European nation, referring to its history. Serbia has been negotiating to become a member of the European Union. There are more advances and benefits than disadvantages and dis-benefits of Serbia`s becoming a member of the EU. Serbia needs to settle issues related to Kosovo as it is the main condition for Serbia`s accession to EU. As a sovereign country with its territorial integrity, Serbia does not recognize Kosovo as an independent country. But, the Serbian government is ready to solve practical issues related to Kosovo. At the end of the Serbian Ambassador`s lecture, we had comments and questions made by four professors, Professor Satoru Kurosawa of Kyoritsu Women’s University, Professor Takaaki Mizuno of Kanda University of International studies, Professor Takafumi Nakajima of Gakushuin Women’s College, and Professor Masako Yonekawa, Rikkyo University as well as other participants of the seminar. They included Mr. Jason Pratt, Public Relations Officer of the Embassy of Afghanistan, Ms. Fujiko Amano of the Japan Ministry of Foreign Affairs, Ms. Sayaka Yamazaki, Administrative Officer of the Ugandan Embassy and Takaya Furukawa of Hosei University.