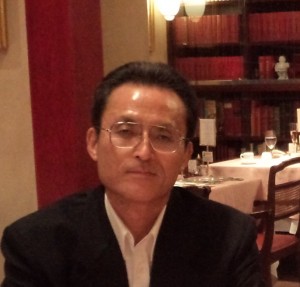 Mr. Yoshitaka Hanada (花田 吉隆) has just returned to Japan having completed his assignment as Japanese Ambassador to Timor-Leste for nearly three years from October 2011 to August 2014. He held a conversation with Professor Sukehiro Hasegawa, former Special Representative of the Secretary-General for Timor-Leste (May 2004~September 2006). Ambassador Hanada discussed economic progress and other improvements made in Timor-Leste as well as challenges faced by the country.

Ambassador Hanada noted peace and stability prevailed even after the departure of UN peace mission at the end of 2012. The maintenance of free trade and market based on the laissez-faire economic policy have resulted in massive investment and commercial activities by Indonesian and Chinese business firms leading to high economic growth. It is so widely reported corruption has been created that the Government is now trying to address. Freedom of press is maintained to keep the society and its leaders responsible to its citizens. But, challenges remain for spreading the benefit of economic benefit to the rural areas. Japan should continue to assist Timor-Leste financially and technically as it remains still one of the least developed among Asian countries. Professor Hasegawa agreed with Ambassador Hanada on the importance of providing assistance in order to enhance the effectiveness of economic management and spreading the benefit of progress into the rural areas.