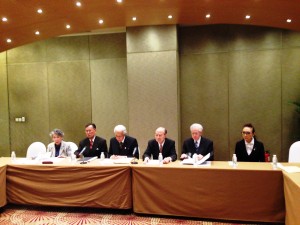 On 16 September 2014, the Presidents of the United Nations Association of Japan, China and Republic of Korea met in Xian, Shaanxi Province in China, along with the representatives of the World Federation of United Nations Associations (WFUNA). They held candid exchanges of their views on the topics of “the Thoughts of Lao Tzu and the Harmony & Prosperity of East Asia”, “Buddhism Exchanges in East Asia during the Tang Dynasty” and “Prospects of Peace Building Operations and Humanitarian Challenges Ahead”.

Prior to the official session, the participants attended a lecture and had lively discussions on the thoughts of Lao Tzu and gained an in-depth understanding of on the philosophies of China. Lao Tzu’s teaching was thought to have had not only profound influence on the philosophical, political and cultural development in the East Asian region and the world beyond in history, but also had relevance to such contemporary issues as peace, security, human rights, sustainable development and climate change.

As stated in the joint declaration issued after the meeting, the participants recalled the close and frequent Buddhism exchanges in the Tang Dynasty between China, Japan and Korea, which had also helped promoting cultural and people-to-people exchanges and made great contribution to the common development in the region during that period of time. Participants discussed the situation and challenges facing UN Peacekeeping and Peacebuilding missions and explored constructive ideas to enhance UN’s work in this regard. They suggested that the three countries could enhance communication and exchanges in the future and contribute Asian wisdom to the UN when appropriate.

The participants agreed that the good tradition of promoting in-depth and frequent exchanges among the three UN Associations and the youths of the three countries should be enhanced and carried on, which is of great significance to the peace and prosperity in this region and the world.