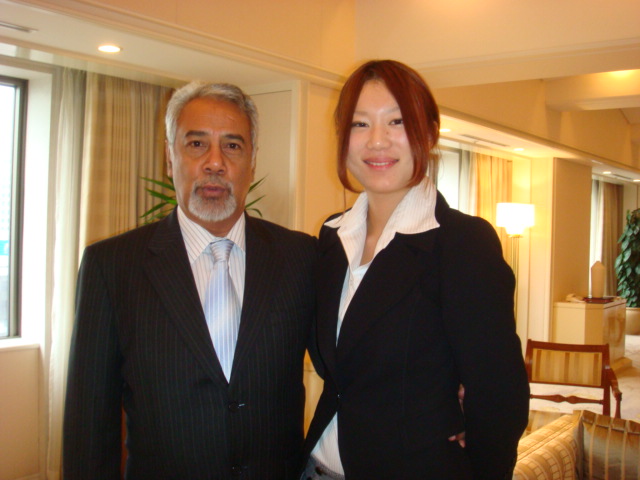 Prime Minister of Democratic Republic of Timor-Leste Xanana Gusmão visited Japan from 8th March 2009. He held a meeting with Professor Sukehiro Hasegawa at Imperial Hotel in Tokyo on 9th March 2009. Minister of Finance Emilia Pires, Minister of Infrastructure Pedro Lay, FDTL Commander Tau Mattan Ruak, Timorese Ambassador to Japan Saramento Alves, Japanese Ambassador to Timor-Leste Iwao Kitahara, and Director of Second Southeast Asia Division Hiroshi Ishikawa participated in the meeting. Head of Hasegawa-Seminar Haruka Ikegawa and Kisho Tsuchiya were also at the meeting. In this meeting, they exchanged their views on the development of the country.

Among the challenges facing Timor-Leste, PM Gusmão and Professor Hasegawa both agreed that improving living standard of people is the main challenge in the country, even though internal security and stability have been restored. They note that international norms and values (gender equality, rule-of-law etc) have been broadly familiarized in the society. In this context, Professor Hasegawa emphasized that Timor-Leste should receive technical assistance from EU and Japan in the supervision of infrastructure sector rehabilitation. PM Gusmão agreed to this observation , but also pointed out that the high unemployment rate has remained. . The Prime Minister explained the importance of the creation of life time employment, permanent job opportunity, and development of private sector. Professor Hasegawa pointed out the importance of eliminating corruption as it would become “a cancersor” for the society and cause the loss of people`s trust in government, resulting in instability of the country again.

2009.3.10
Haruka Ikegawa and Kisho Tsuchiya contributed to this story.