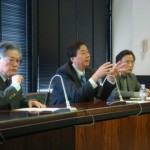 Summary of Mr. Inoue’s presentation on Status of Democratic Governance in TL

2. Difference between UNMIT Democratic Governance Unit (DGU) and UNDP DGU
Main activities of UNMIT-DGU are (i) Monitoring (ii) Research and analysis (iii) Policy advice to the SRSG, and (iv) Advocacy. In contrast, UNDP-DGU provides (i) Capacity building support and (ii) Technical advice to the Timor-Leste counterparts. Both UNMIT-DGS and UNDP-DGU are closely working together as an integrated mission or“One UN”.

3. Roles and functions of UNMIT
The Security Council extended the mandate of UNMIT for another year, until 26th February 2010. At the request of the Security Council, UNMIT has formulated the Medium-term (3-5years) strategic plan with benchmarks and milestone, which consists of 4 main priority parts. They are (i) ensuring security and stability, which includes security sector review and reform, and the resumption of the PNTL (National Police of Timor-Leste); (ii) rule of law, justice and human rights (An independent and comprehensive needs assessment ofthe justice sector is planned); (iii) culture of democratic governance and dialogue; and (iv) socio-economy development (which is supported by the UN Country Team and the bi-lateral donors).

4. UNMIT Democratic Governance Unit
Democratic governance could be defined as a management system of a society based on the values of democracy. Althoughdg the concept is very broad, UNMIT-DGU focuses on the following 6 core governance areas:
(1) Constitutionalism and separation of power
Exercise of power has to be separated based on the constitution and among the four organs of sovereignty in TL, i.e. President, National Parliament, Government, and Court. Previously, the UN put emphases mainly on strengthening the Government, which weakened the balance of power. Currently, UNMIT and UNDP are supporting all four organs so as to balance the power among them.
(2) Decentralization and local governance
The Government of Timor-Leste is highly centralized although their overall capacity is weak. Although there are 65 Members of National Parliament, they were elected based on a single list of political party candidates. Therefore, there is no constituency at a district level for the MPs. This gives people an impression that the attention of the Government and the parliament are concentrated in the capital city rather than the people in districts. Decentralization is needed in Timor-Leste, and it is anticipated that each districts is converted to Municipality, and Mayor and Members of Municipal Assembly will be directly elected by people in a district.
(3) Elections
The Presidential Elections and the National Parliament Elections were held in 2007. Suco and Municipality Elections are expected to be held this year. UNMIT and UNDP are jointly supporting the electoral management bodies to ensure free and fair elections.
(4) Civil service reform
The government started establishing the Civil Service Commission with support of UNMIT and UNDP. The Ministry of Finance is handling the aid coordination to ensure effective and efficient developmental assistance to TL.
(5) Transparency, accountability and anti-corruption commission
The Government has proposed the establishment of Anti-Corruption Commission, which would be in charge of dealing with prevention and investigation of corruptions. Although Office of Provedor (Ombudsman) exists, human rights and anti-corruption issues should not be handled by the same organization, therefore, the UN is supporting the establishments of the new Anti-Corruption Commission.
Another institution is the High Administrative and Tax Auditing Court (HATAC), which has not been established yet.
(6) Civil society and media
In order to promote a culture of democratic governance, sound development of civil society organizations and media are essential. Therefore, UNMIT and UNDP are supporting them.