Graduate students who participated in the annual meeting of the Global Peacebuilding of Japan found the presentation made by Professor Takayuki Mizuno of Kanda University of International Relations best in terms of its content and clarity of presentation. 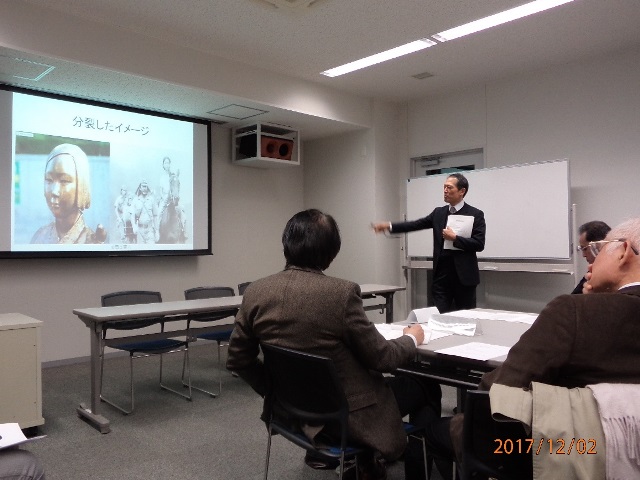 According to Prof. Mizuno, in the post-conflict societies, former “enemies,” whether they are the victims or the perpetrators, have to coexist within a society. In the first stage of the peace-building process, the minimum agreement of “peaceful co-existence” must be made among them. In the second stage the community must pursue the “shared interests” of the community especially in the area of reconstruction field. In the third but the most difficult stage, there must be “shared value” to enable recognition of each other`s dignity and reconstruction of the sense of community membership of a nation needed for the completion of peacebuilding process.

Media plays a vital role for the peace building efforts. It reflects the social consciousness acting like a mirror for transmission of image and information.

The controversy over the “role of media” in the peace-building process have often focused on its negative coverage mainly of events in conflict areas or the developing countries. However, media also has potential to make positive changes in people’s mindsets, especially perception of “others.”

In this sense, media functions like a double-edged sword. This is the case not only in Rwanda and Cambodia but also in so-called advanced countries or democracies like the United States and Japan.

Prof. Mizuno shared his view on how Japan’s news media had covered the so-called the “comfort women” issue since 1970s as an example of the double-edged function of the media coverage. He analyzed the issue in the context of the bigger perspective of how “the liberal pacifist post-war Japan” had failed to achieve the lasting “reconciliation in East Asia”.