Professors Mitsugi Endo of Tokyo University and Daisaku Higashi of Sophia University as well as Mr. Takaki Imai, Representative of Japan Volunteers Center, commented on the causes of conflicts and the prospect for overcoming the challenges. 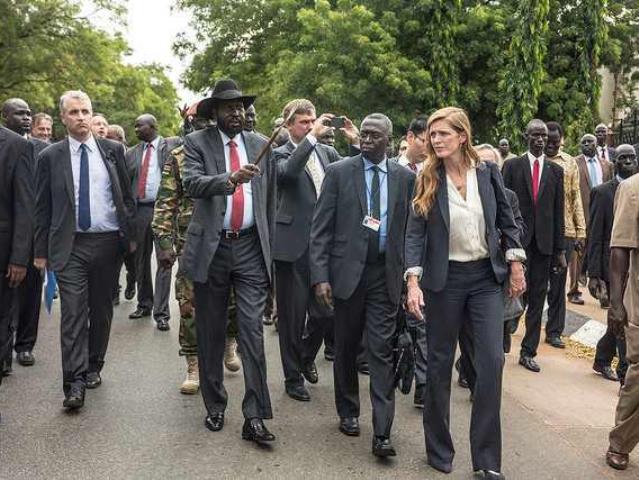 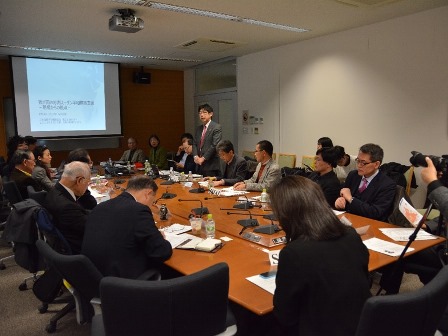 Ambassador Mr. Masahiko Kiya’s speech was focused around four points. The first one is the reason for assisting South Sudan now, the second one is peacebuilding issues in South Sudan, the third one is the strength of Japan’s cooperation, and the last one is the remaining issues for the future.

On the first point, the first important thing is that Japan has sent Self-Defense Force to South Sudan. It is also the biggest humanitarian crisis at the world level: the second one after Syria. It is a continuous issue how Japan has been contributing to the South Sudan’s peacebuilding process.

On the second point, Ambassador Kiya briefly explained the history of South Sudan: from the conflicts between 1954 and 2005, the Comprehensive Peace Agreement (CPA) in 2005, South Sudan’s independence in July 2011, the political crisis in December 2013 and the recent agreement in August 2015. There have been some problems before 2013, such as conflicts involving petrol, but the political crisis in December 2013 was the point when the conflict became apparent.

The 2013 Agreement was signed under international pressure. At the end of April 2016, the interim government was finally installed. In July 2016, there was an armed confrontation at the President Kiir’s residence. As a result, Deputy President Machar fled to South Africa. An anti-government group installed another candidate, and that created chaos. A draft Security Council resolution to pressure South Sudan to solve the problem was not adopted. After the change of the UN Mission in South Sudan (UNMISS) leadership and the UN Secretary-General, the atmosphere has improved, but where propaganda worked (southern part), security situation has worsened. Partly because of Inter-Governmental Authority on Development (IGAD) and UNMISS’ work, in December 2017, there was a new agreement. 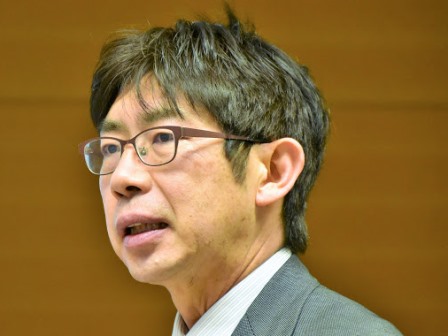 There are four million displaced persons, including two million internally within borders. This means that one third of the population is displaced and fleeing, and there are crimes involving killings and rape. Another big problem is the distrust between political leaders, stemming from a long history of fighting and problems involving petrol. An equally big problem is security. Governance is another problem, i.e. the inability of the government to provide social service, distribution of small arms and loss of political influence by traditional leaders. Economy remains problematic.

It is important that there is an agreement among neighboring States. With the recent agreement, now it is time to build peace.

On the strength of Japan, it is important that Self-Defense Force (SDF) is there to support protecting civilians and not to build infrastructure. SDF contributed to making the peacekeeping operation functional. It has also contributed to a better cultural understanding through cultural exchanges involving sports and festivals. Japan is also leading the moral and order among the international community. JICA has provided a large-scale infrastructure contribution including through water. It has also built capacity and the government structure. Japan has also supported activities of international organizations through partnership between UN agencies and other States. Japan has also supported various ministries. Part of that was supporting the police in South Sudan, together with the Netherlands. Japan has also worked with the International Committee of Red Cross (ICRC), as well as with non-governmental organizations as ‘All Japan’ effort.

Finally, notwithstanding above, there are remaining issues. The common element is to support local initiatives. Ambassador Kiya believes that, Japan, as a large country providing assistance based on activities and trust, can make a unique contribution to peacebuilding in South Sudan. Any support for reconciliation needs to be based on understanding of the local situation.

Following Ambassador Masahiko Kiya`s presentation, three commentators presented their understanding of the causes of conflicts and the prospect for overcoming the challenges. 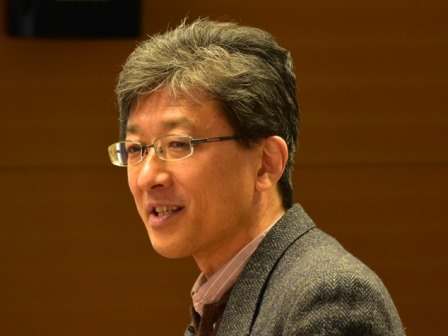 Prof. Endoh commented that the reason that there are many conflicts in Africa is because there are conflicts between peoples. That is why there are normally power-sharing among peoples. In South Sudan, Kiir and Machar shared power. However, in 2013, one year before the election, Kiir removed Machar and conflict erupted.

In Africa Conflict Studies, there is a discussion that coup d’etre and conflict trade off with each other. That is, power-sharing makes coup d’etre more likely but that removal of power-sharing increases the risk of a conflict. If this was acknowledged before 2013, further conflict may have been avoided. There is also a question about election. Election is considered to be the main method to secure peace, but it is in fact difficult to ensure transparency and to make it as a basis for future peace.

Issues remain in relation to peacebuilding. It should be led by the local people. If outsiders attempt to influence their interests, risks increase. Having said that, local mechanism to lead peacebuilding is yet to be established in South Sudan. How to solve the dilemma is a remaining issue. 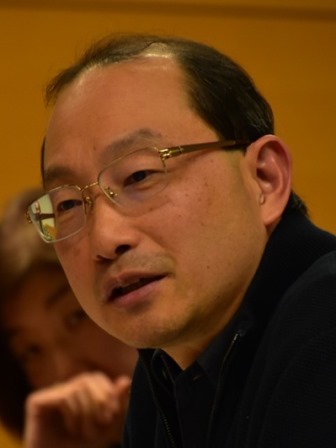 Prof. Higashi emphasized that he found that Amb,Kiya was highly respected and appreciated by both South Sudan government officials and opposition leaders when Prof. Higashi conducted field research on South Sudan peace process in the summer of 2016 and in the spring of 2017. With regard to the peace process, Prof. Higashi asked about the future political role of Riek Machar, former Vice President in South Sudan. He also explained his policy recommendations about how to continue the support for South Sudan after Japan withdrew Self Defense Forces from UNMISS in May 2017, and emphasized the importance of training young bureaucrats from different ethnicities who could become a backbone for nation-building of South Sudan. On this matter, he asked question about what could be challenges for Japan to train these South Sudan officials, overcoming the ethnic conflicts and rivalry. He finally asked the role of Japan in the peace process of South Sudan. 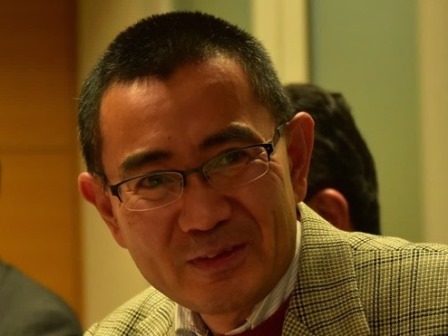 Mr. Imai explained the situation in the field. The prices are skyrocketing but people’s salary remains at the same level. That worsens the security situation including incidents involving weapons and arms. There is a strong distrust against the current President, but that does not mean that there is support for former leaders. Japan’s contribution should be focused on capacity building and not infrastructure given the security situation and the struggle in getting on the track of the peace process. Japan should be careful not to send a wrong message that Japan is supporting Kiir. Mr. Imai recommended that more Japanese experts should be sent to South Sudan, and that the limitation of sending Japanese experts may be too strict. Local administration functions are very important. There is a lot of potential but the local capacity needs to be built. Japan’s human resource is easily accepted compared to some other States. However, ‘All-Japan’ approach may be better not to be the main message in fact, because of the civilian nature of humanitarian work.

The floor was open for questions and answers. 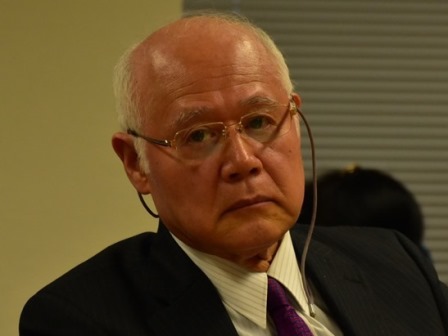 Professor Tadanori Inomata, Strategic Advisor, Nagasaki University_Center for International Collaborative Research stated: Why should Japan extend support for the conflict areas like South Sudan? In view of the current situation in Japan, a compelling explanation to the public is necessary. Western countries endorse POC in South Sudan on the ground of R2P, but the Japanese people are not so convinced of. Dispatch of Japanese contingents to PKOs, after UNTAC, has been motivated by opportunistic consideration to appear providing pretty contribution no less conspicuous than other troop contributing countries. Chronologically speaking, the dispatch of Japanese contingent to South Sudan followed and filled the hiatus created by the withdrawal of its contingent from Haiti. Japan’s assistance to PKOs should not hinge on the concept of humanitarian intervention or a crusader type of motivation. Instead, it should promote, at the grassroots level, self-reliance of the affected people on the ground for the improvement of their proper peace and security, which is the strength of Japan’s assistance as emphasized by the speaker, Mr. Kiya and Mr. Imai pointed. 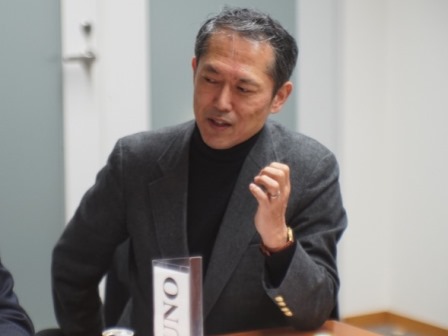 Professor Takaaki Mizuno of Kanda University of International Relations pressed his understanding that tribal and ethnic groups in South Sudan had not been exhausted of armed fighting. It is significant to provide assistance that will remain as a legacy. 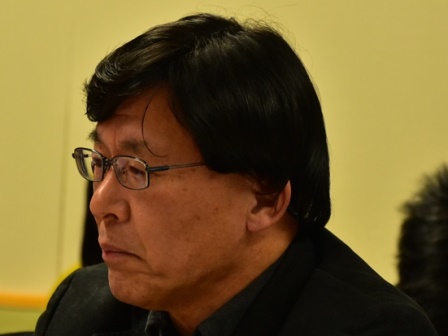 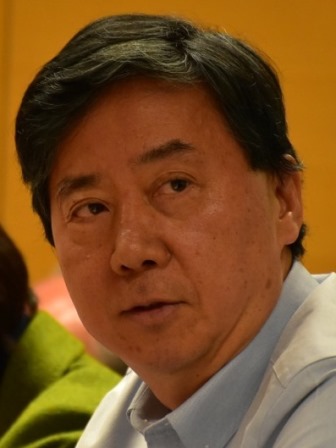 Mr. Ken Inoue, Senior Advisor on Democratic Governance of JICA, found the descent of South Sudan into armed conflict as a failure of the international community. He noted the problem of spoilers. He asked about any possibility for Japan`s return to South Sudan and pointed out the need to find ultimately a political solution.

Ambassador Yoshitaka Hanada noted the need for explaining to Japanese people why Japan had to extend its assistance to such a country as South Sudan which was located far in Africa and continued to remain unstable. He said that in view of Japan`s increasing national debt, it was high time that Japan considered providing assistance that would be financially less costly instead of infrastructure and other material assistance.

Ms. Setsuko Yamazaki, former UNDP Country Director in Cambodia and Vietnam noted the interference by big powers were not helping resolve conflicts and achieve peace, while Professor Mariko Shoji of Keiai University asked about the activities of women in South Sudan who had been supported by international organizations. Mr. Sumihiro Kuyama, former UN ASG, mentioned the need for ensuring sustainability of reconstruction of South Sudan. He also pointed out, concerning the role of Peacebuilding Commission, the importance of prevention in addition to [post-conflict] peacebuilding, as endorsed by the Security Council / General Assembly resolutions in April 2016. 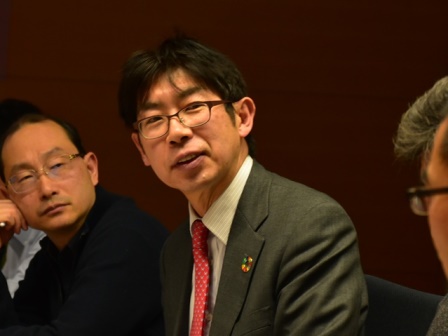 In response to comments and questions raised by the commentators and participants, Ambassador Kiya stressed the fact that Japanese assistance had been highly appreciated by the government and people of South Sudan. The fact that Japan was providing assistance within the framework established by the Constitution of Japan was well understood by the international community. He also stressed that the self-discipline of Japanese Self-defense Force personnel and their engagement of highly professional nature had contributed to raising the moral standard of UNMISS staff. The international actors that have been engaged politically with South Sudan were IGAD and so-called Troika consisting of US, UK and Norway. He also mentioned the importance of the African Union and the UN in contributing to achieving sustainable development goals (SDGs). Japan should achieve efficient and effective “all-Japan” approach by strengthening the link between humanitarian and development assistance with peacekeeping activities. 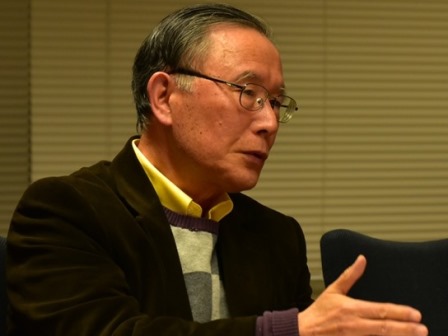 In concluding remarks, Professor Hasegawa thanked Ambassador Kiya for his presentation and dialogue with the participants. Hasegawa thought that the United Nations should have carried out a Transitional Administration in South Sudan as it had done in Cambodia and East Timor in order to establish a foundation for stable political governance. He also mentioned that the UN peace mission should have as one of its mandate to nurture the spirit and mindset of leaders for good governance.

(Summary note by Prof. Ai Kihara-Hunt, the University of Tokyo)