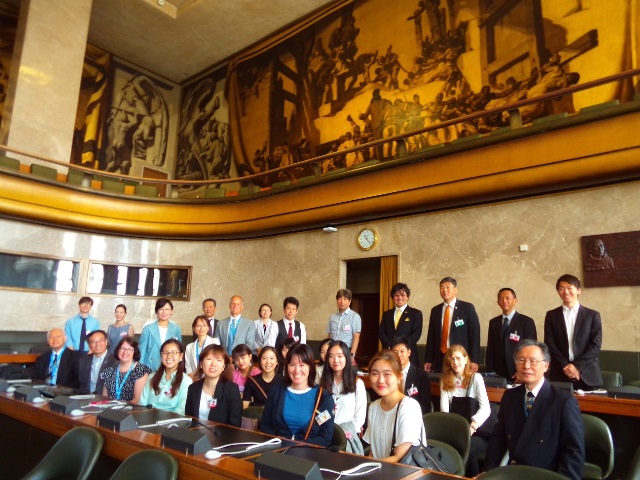 In 1952, the General Assembly, by its resolution 502 (VI) of January 1952, created the United Nations Disarmament Commission (UNDC) under the Security Council with a mandate to prepare proposals for a treaty for the regulation, limitation and balanced reduction of all armed forces and all armaments, including the elimination of all weapons of mass destruction. However, it met only occasionally after 1959.

In 1978, the first special session of the General Assembly devoted to disarmament established a successor Disarmament Commission as a subsidiary organ of the Assembly, composed of all Member States of the United Nations. It was created as a deliberative body, with the function of considering and making recommendations on various issues in the field of disarmament and of following up on the relevant decisions and recommendations of the special session. It reports annually to the General Assembly.

In light of its function, the UNDC focuses on a limited number of agenda items at each session. In 1989, to allow for in-depth consideration, it decided that its substantive agenda should be limited to a maximum of four items. From 1993, it has, in practice, dealt with two or three items, each of which has usually been considered for three consecutive years. In 1998, by its decision 52/492, the General Assembly decided that the UNDC’s agenda, as of 2000, would normally comprise two substantive items per year from the whole range of disarmament issues, including one on nuclear disarmament.

Over the years, the UNDC has formulated consensus principles, guidelines and recommendations (see below) on a number of subjects, which have been endorsed by the General Assembly. After 1999 and until 2017, it was unable to agree on any substantial outcome. In 2017 it succeeded in adopting consensus recommendations on “Practical confidence-building measures in the field of conventional weapons”.

The UNDC is serviced substantively by the Office for Disarmament Affairs and technically by the Department of General Assembly Affairs and Conference Services.

UNODA provides substantive and organizational support for norm-setting in the area of disarmament through the work of the General Assembly and its First Committee, the Disarmament Commission, the Conference on Disarmament and other bodies. It fosters disarmament measures through dialogue, transparency and confidence-building on military matters, and encourages regional disarmament efforts; these include the United Nations Register of Conventional Arms and regional forums.

UNODA supports the development and implementation of practical disarmament measures after a conflict, such as disarming and demobilizing former combatants and helping them to reintegrate in civil society.

(Source: UN Office for Disarmament: “About US”)