Russian President Vladimir Putin, Turkish President Tayyip Erdoğan, Canadian Prime Minister Trudeau along with several other heads of state and government listened as Merkel, Macron and United Nations Secretary-General António Guterres spoke about the importance of the U.N. and other multilateral institutions to address global problems. 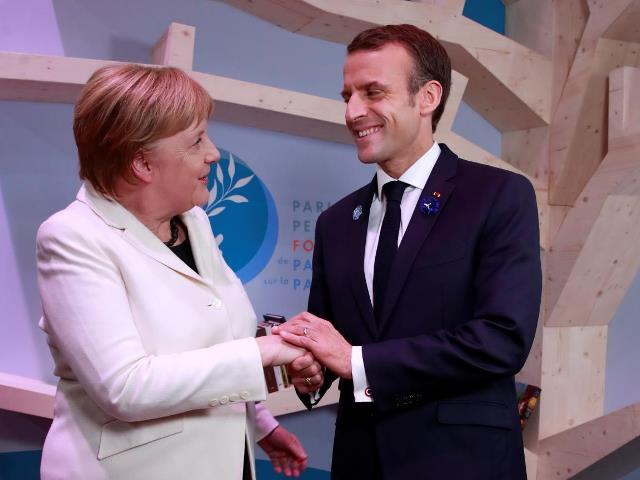 Of these ceremonies for the centenary of the 1918 Armistice, history will no doubt remember an image: 84 heads of state and government from once warring nations, peacefully reunited in Paris under the Arc de Triomphe. But what remains uncertain for the future is the way that image will be interpreted; will it be the vivid symbol of a lasting peace between nations or, on the contrary, a photograph showing a final moment of unity before the world descends into fresh chaos? And this depends on us alone.

The world in which we live is being weakened by crises which are destabilizing our societies: the economic, environmental and climate crises and the migration challenge. Weakened by the resurgence of threats which could strike at any moment: terrorism, chemical and nuclear proliferation and cyber crime. Weakened by the return of grim passions – nationalism, racism, anti-Semitism, extremism – which call into question the future our peoples expect.
That’s why we wanted to organize this Paris Peace Forum, which is destined to take place every year and draw together heads of state and government, of course – and I want to thank everyone who’s here and has mobilized –, but also representatives of international organizations, non-governmental organizations, local authorities, voluntary organizations, businesses, foundations, intellectuals, journalists, activists; as you said, chère Trisha, everyone who makes up the world today and can change it.

The aim of the Paris Peace Forum is to bring people together every year to promote practical action so that peace efforts make a little more progress every year. It’s also because of this that I want to welcome the presence of Nadia Murad, the 2018 joint Nobel Peace Prize winner, who in a few moments’ time will be launching a very concrete project to consolidate peace through her foundation for the Sinjar district in northern Iraq. Thank you.
So my dear friends, we’re here today because all those who fell 100 years ago, as Clemenceau said, have rights over us. And this is where our duty lies. A hundred years ago we didn’t succeed in winning the peace, because France and Germany continued to be divided. And from humiliations to crises and the rise of totalitarianism, war broke out again 20 years later. It’s why I was really keen for this Paris Peace Forum to be inaugurated by Chancellor Angela Merkel. Thank you, chère Angela.

And 100 years ago, our predecessors tried building this peace to last; they invented the League of Nations, the first form of international cooperation. But it was shattered by unilateralism in some quarters, by economic and moral crises and by nationalism. That’s why I wanted António Guterres, the United Nations Secretary-General, to be the second speaker to open this Paris Peace Forum. Thank you, cher Antonio, for being here.
That’s what I wanted to say to you, ladies and gentlemen. Thank you for coming and I thank Chancellor Merkel and Secretary-General Guterres for their presence and their words. Let me hand over to them. Thank you.

(Source: Permanent Mission of France to the United Nations)