At the ASEAN Regional Forum held in Nanjing, China, GPAJ President explained that the UN had pursued retributive justice while Timor-Leste preferred restorative justice and reconciliation and friendship following establishment of truth.

At the ASEAN Regional Forum workshop held on preventive diplomacy on 29-30 November 2018 in Nanjing, China, Professor Hasegawa who was Special Representative of United Nations Secretary-General for Timor-Leste from 2004 to 2006 shared with the participants lessons he had learned from successful preventive diplomacy conducted by Timor-Leste leaders with Indonesia and Australia. 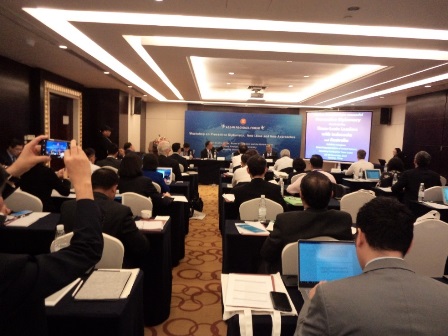 According to Hasegawa, there are three valuable lessons learned from successful preventive diplomacy carried out by Timor-Leste leaders in their quest for post-conflict reconciliation and peace with Indonesia and maritime boundary negotiations with Australia 2018. They are the importance of sustaining first commitment to moral law in rebuilding the relationship among countries and secondly maintaining the principle of international law in settlement of disputes among nations regarding territorial issues. Thirdly, these two insights to conflict resolutions reveal the need for (1) change in the mindset and mentality of political leaders and (2) change in the structure of international system of governance. Hasegawa then stressed the importance of reforming the global governance structure as the human nature will not change as shown in the history of mankind spanning over the last several thousand years.

1. Lessons learned from successful post-conflict reconciliation between Timor-Leste and Indonesia

During the period of 24 years of Indonesian occupation of East Timor from 1975 to 1999, approximately 100,000–180,000 soldiers and civilians are estimated to have been killed by the Indonesian National Armed Forces or starved to death. This accounted for one-fifth of the entire population. After the political independence achieved through the popular consultation organized by the United Nations in August 1999, the United Nations established a serious crimes unit to carry out criminal investigations of Human Rights violations alleged to have been committed in East Timor by Indonesian and pro-Indonesian military forces during 1999. Head Justice Phillip Rapoza of the hybrid special court on serious crimes consisting of UN appointed and Timorese judges then issued an arrest warrant for former Indonesian armed forces commander, General Wiranto, for war crimes committed immediately before and after East Timorese casted vote for independence. It was one of several arrest warrants issued for some 20 Indonesia military commanders. (Hasegawa, Sukehiro. Peacebuilding and National Ownership in Timor-Leste, Routledge, 2013, New York, p.167.) 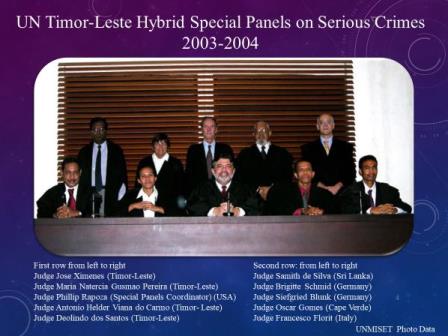 This action was taken based on the theory of retributive justice which focused on punishment of the criminals who should get their share of responsibility for moral blameworthiness. This approach was pursued by the United Nations on the belief that the best response to a crime is a punishment proportional to the offense inflicted. While the prevention of future crimes was not considered of prime importance in determining the extent of punishments, the United Nations regarded the application of retributive justice critical in reducing the prospect for future crimes of serious nature and increasing the prospect for achieving sustainable peace.

Apart from the retributive approach, another process was launched in South Africa after the end of apartheid in the 1990`s in the form of Truth and Reconciliation Commission (TRC). Commonly known as the Mandela approach, this approach constituted a court-like restorative justice body assembled to enable perpetrators of violence to give testimony of their acts and request amnesty from both civil and criminal prosecution. The Timorese leaders were willing to go one step further and agreed with the Indonesian counters to constitute a Truth and Friendship Commission. The Commission was officially created in August 2005 to investigate acts of violence that occurred around the independence referendum held in East Timor in 1999 and sought to find the “conclusive truth” behind the events and notably “prepare recommendations that can contribute to healing wounds of the past and strengthen friendship”. In other words, the Commission was tasked with strengthening peace and friendship between the two countries by revealing the conclusive truth about the nature, scope, and causes of the violence committed in East Timor in 1999. 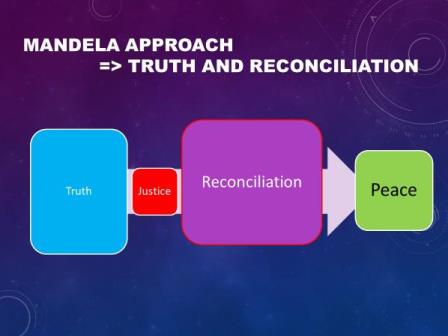 The significance of the approach adopted by Timor-Leste and Indonesia is the fact that they did not follow the strictly legalistic approach and applied the moralistic approach that accorded forgiveness and generosity over vengeance and punishment.

2. Resolution of maritime boundary disputes between Timor-Leste and Australia

In the case of its negotiation with Australia about the maritime boundary, the Timorese leaders adhered to the rule established by the multilateral institution, i.e. the Permanent Court of Arbitration. Insisting that the maritime arrangements Australia had made with Indonesia was not only an expedient product but in violation with the international law. While Australia had sought a boundary aligned with its continental shelf, Timor-Leste argued the border should lie half way between Timor-Leste and Australia – placing much of the Greater Sunrise fields under its control. The fields are estimated to hold 5.1 trillion cubic feet of gas and 226 million barrels of condensates estimated worth $40 billion. The final agreement marks the maritime border around the median line between the two countries – a concept supported by international law and at odds with Australia’s long-running claim of entitlement over the continental shelf. The treaty recognizes the rights of both nations, and establishes a special regime for the joint development, exploitation and management of the Greater Sunrise gas fields. The treaty was the result of the first-ever concluded between two countries. 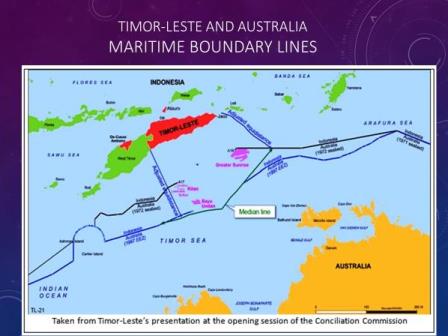 As the British newspaper, The Guardian reported on March 6, 2018, UN Secretary-General António Guterres said “This ceremony demonstrates the strength of international law, and the effectiveness of resolving disputes through peaceful means.” conciliation under the UN convention on the law of the sea. 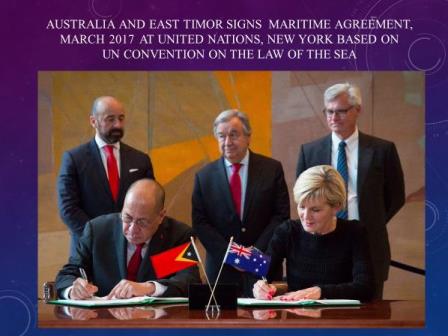 3. Need for reforming the international system of governance.

Professor Hasegawa identified two root causes of conflicts. First it was never ending greed for power and wealth held by human beings. The leaders need to free themselves from their own greed and appetite for gaining and maintaining personal power and wealth. This was the third kind of freedom that philosopher Immanuel Kant talked about and they constituted “bonno” in Buddhism. 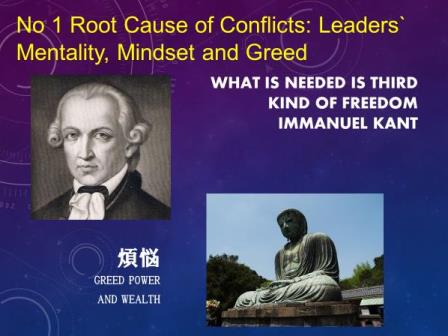 As we are living in the Hobbesian world of anarchy, we are at war of all against all.

During the last century alone, we had colonial wars, Balkan Wars, World War I and II, Korean War, Vietnam War, Iran/Iraq War, etc. According to the IWM, as many as 187 million people killed in wars during the 20th century alone. History has taught us that human nature does not change. If this is the case, we need to develop an international system of governance that transcend the Westphalian system of independent sovereign nation states. Nation states have fought time and again as no superior power existed to restrain and govern them properly. 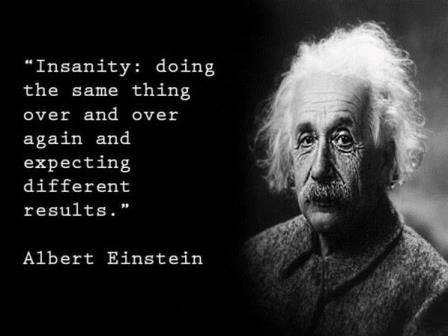 As Einstein has said, It is “Insanity: doing the same thing over and over and expecting different results.”

Professor Hasegawa then referred to the Paris Peace Forum launched by President Macron of France and attended by such other world leaders as Chancellor Merkel of Germany, President Putin of Russian, President Erdogran of Turkey, and other heads of states and government. Hasegawa then proposed to activate Article 109 of the UN Charter to transform the structure of the United Nations from that of the Nation-States as Article 2 states to that of the Nations United for One World. He then quoted Einstein again. “Problems we face today cannot be solved at the level of thinking we were at when we created them. Pen is mightier than sword, but imagination is more powerful than knowledge.”