Achim Wennmann, Researcher at the Centre on Conflict, Development and Peacebuilding (CCDP) at the Graduate Institute of International and Development Studies in Geneva and Executive Coordinator of the Geneva Peacebuilding Platform made a presentation on the future of peacebuilding at the JICA, Global Plaza on Friday the 19th of April, followed by a lively discussion amongst the participants. 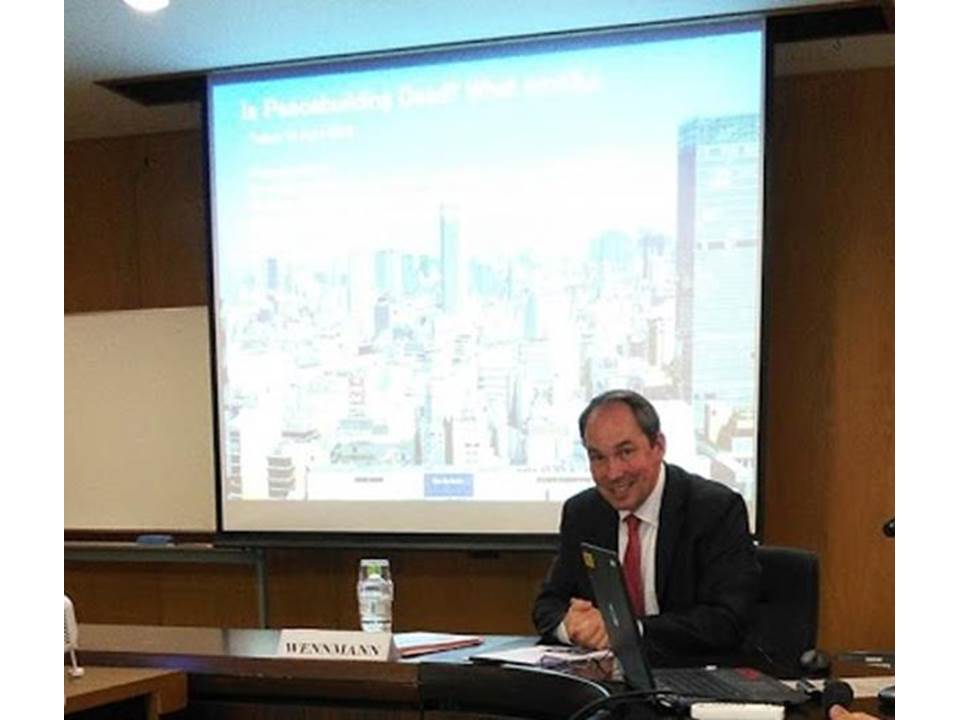 Mr. Wennmann presented his understanding and views on the age of ‘liberal peacebuilding’, and how it will change in the future. He asserted that over the last three decades, peacebuilding practice had been dominated by a set of assumptions that set countries onto the pathway towards a ‘liberal’ peace. Yet the ‘liberal’ project to rebuild societies after armed conflict had become increasingly dysfunctional, orphaned and cashless. One of the most important supporters for ‘liberal peacebuilding’ had been the United Nations (UN) system, but its main stream had moved from PKO projects to stabilization and counterterrorism. These changing strategic landscapes highlighted that peacebuilding has reached a critical juncture.

Therefore, what kind of peacebuilding practice could be imagined for the next decade? Dr. Wennmann argued that such practice could rest on five building blocks consisting of (1) the collection of trustworthy data, (2) collaborate analysis, (3) progressively expanded coalitions for change, (4) targeted interventions that address the most acute risk factors of conflict and violence, (5) as well as sustained institutional support by an honest broker. He also mentioned youth mobilization as one of the most potent supporters in the new era of peacebuilding.

Finally, Mr. Wennmann emphasized that it was important to not just claim that the ‘liberal peacebuilding’ period was over, but, considering the changing nature of the international system, to redefine what peacebuilding would be about in the coming decades. 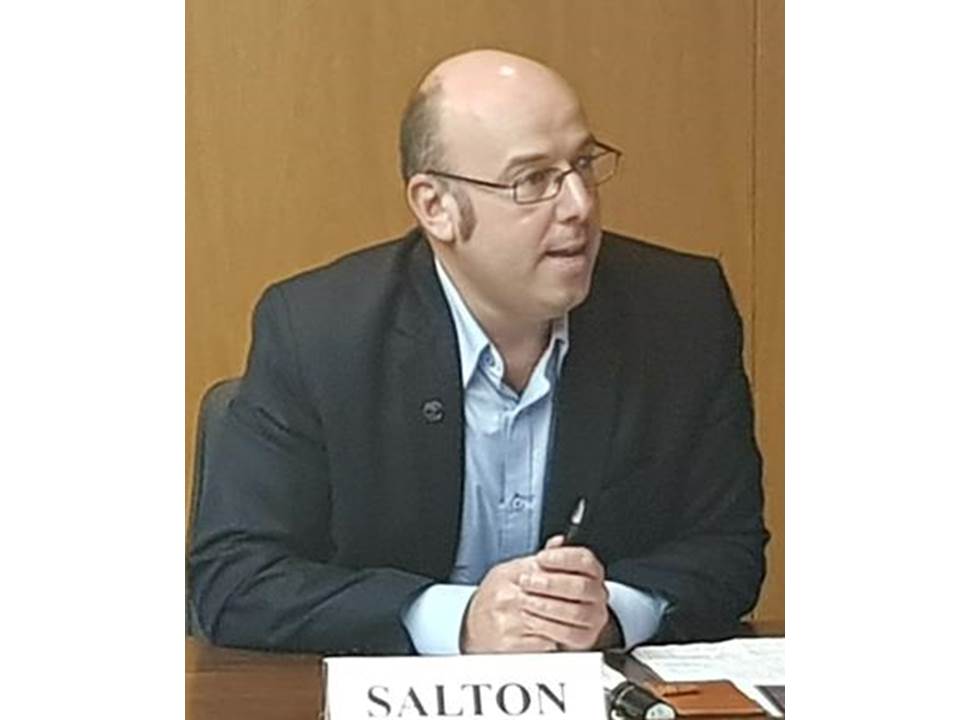 The first discussant, Prof. Herman Salton, raised two points following Dr. Wennmann’s presentation. First, he noted that, in the expression ‘liberal peace’, ‘liberal’ was not the only contested term. ‘Peace’ itself was subject to myriads of interpretations, and it was often unclear (including to senior UN officials) what kind of peace the organization wishes to pursue. Second, despite being an international lawyer by training, Prof. Salton cautioned that the law was not necessarily a barrier to authoritarianism, and hence could not always guarantee peace and security to the people. For example, the so-called ‘rule of law’ was not necessarily a great guarantee against abuse when it is enacted by authoritarian regimes that happily use it to repress their people. In other words, the law and liberalism are not necessarily synonyms. These two points should be taken into consideration in the discussion about the future of peacebuilding. 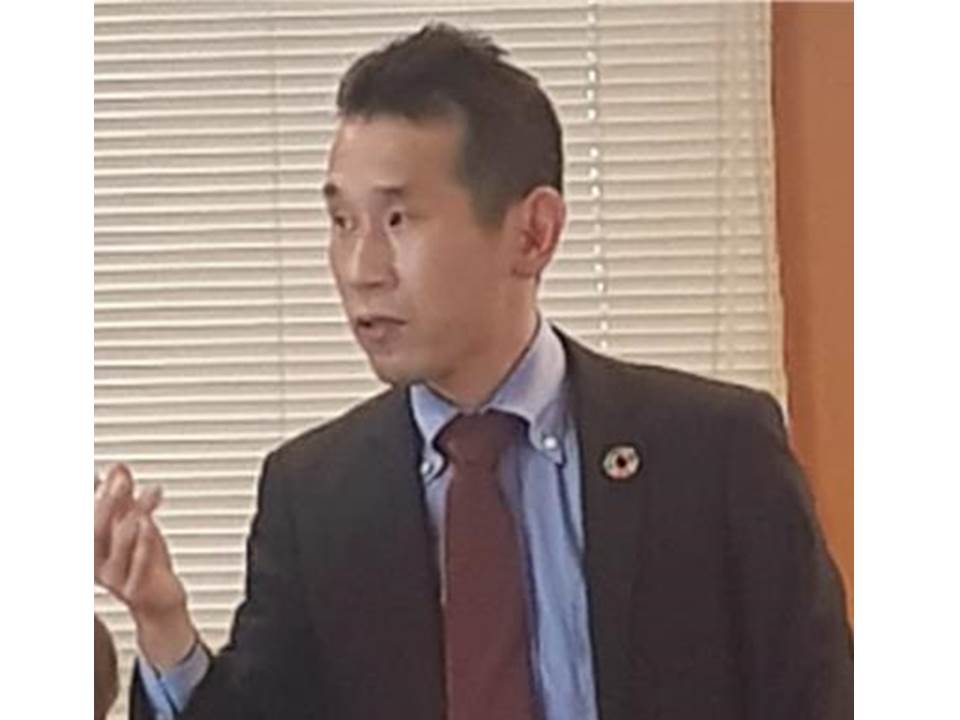 The second commentator, Mr. Sakane, noted that when it came to the question on whether “liberal peacebuilding is dead”, one had to take into consideration whether the concept of liberalism as such, which promoted free trade or the free flow of people, had lost its popular support. He also pointed out that the nature of the current global system had changed from Bipolar to Unipolar, to Multi Polar/ Non Polar and was now moving towards a chaotic structure. In addition, the international community should take into consideration that both, the nature as well as the features of crises had changed from intrastate conflict to terrorism and to state-violence, criminal violence and far-right extremism, as the rising populism in Europe was a primary example of. Another point to take into consideration, was that international players were increasingly diversifying. Countries in the Middle East do not hesitate to intervene in the process of conflict, posing new challenges to conflict resolution and eventually further complicate the process.

Second, Mr. Sakane pointed out that governments needed to reconsider how they weigh the opinions of its citizens to those of experts and technocrats. So far, the lack of consideration of the opinion of experts has led European governments to implement policies that have shown not to be in the best interest of the state, such as Brexit was a primary example of. According to Mr. Sakane, a democratic system consisted of people, technocrats and politicians. Under ideal conditions, people’s wishes were modified by technocratic views and works. The state representatives are expected to come up with a balanced decision after taking voices from both sides into consideration. However, if we looked into the processes which resulted in Brexit, we see that the will of the people has been prioritized over the opinions of technocrats and experts, which have been underestimated under populism. For the future of peacebuilding, it might hence be vital to reestablish the role of technocrats back to its original position. Furthermore, the rise of populism in Europe and terror attacks in Christchurch have shown that a root-cause of current conflict is a sense of exclusion or disparity. Therefore, it was important to include the marginalized people and promote social cohesion. In order to promote peace, SDG 16 is relevant. However, the SDG’s core concept of “No one left Behind” was also very important to consider. In terms of adaptation policies, regional organizations, such as IGAD, play an important role for peacebuilding as well, as understanding the local context is key for both conflict resolution and peacebuilding. Also, confidence building between government and people was indispensable for sustaining peace. Resurgence of multilateralism or respect of mutual dependency is also crucial.

Following the comments made by two discussants, Mr. Tanabe spoke and pointed out the recent discussions on peace-building approaches. In addition to the liberal peace approach, which is considered to be state-centered and “top-down” approach, focusing on promoting democratization and market-oriented economy, “bottom-up” approach, focusing on inclusiveness of local actors attract more attention for attaining sustainable peace in recent years. In the case of South Sudan, along with state-centered top down approach, bottom-up approach has been undertaken though promoting national dialogue process. However, there are criticism that this process was initiated by the President Kiir, and it is an ostensible effort of reaching local actors. In this argument, Mr. Tanabe inquired about who in particular need to be integrated into the dialogue process to promote inclusiveness of locals in peace-building efforts aiming at sustainable peace.

Mr. Hasegawa concluded the meeting by noting several points made by Dr. Achim Wennmann as well as commentators and participants, in particular the demise of liberal peacebuilding. However, it did not mean the disappearance of peacebuilding itself. The most salient point made by many speakers was that peace was no longer achievable in an isolated area and manner as the globalization process had made inseparable the developments taking place in the international and local communities. Hasegawa then noted his views that, during the last several decades after World War II, Japan followed the prudent policy of engaging in international peace and development efforts through the United Nations, although this had sometimes been criticized as a checkbook diplomacy. Japan should proudly state that the world would have been a more peaceful place if all other countries respected and acted through the United Nations as a universal organization with the legitimacy to carry out global cooperation for peace and development.

(This article was compiled by Ms. Maja Liechti, Elizabeth Gamarra and Rie Kuriyama.)